Victory at Home (Economy and Society in the Modern South) (Paperback) 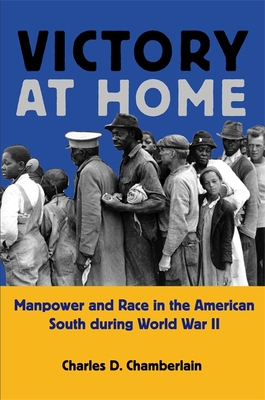 Victory at Home is at once an institutional history of the federal War Manpower Commission and a social history of the southern labor force within the commission's province. Charles D. Chamberlain explores how southern working families used America's rapid wartime industrialization and an expanded federal presence to gain unprecedented economic, social, and geographic mobility in the chronically poor region.

Chamberlain looks at how war workers, black leaders, white southern elites, liberal New Dealers, nonsouthern industrialists, and others used and shaped the federal war mobilization effort to fill their own needs. He shows, for instance, how African American, Latino, and white laborers worked variously through churches, labor unions, federal agencies, the NAACP, and the Urban League, using a wide variety of strategies from union organizing and direct action protest to job shopping and migration. Throughout, Chamberlain is careful not to portray the southern wartime labor scene in monolithic terms. He discusses, for instance, conflicts between racial groups within labor unions and shortfalls between the War Manpower Commission's national directives and their local implementation. An important new work in southern economic and industrial history, Victory at Home also has implications for the prehistory of both the civil rights revolution and the massive resistance movement of the 1960s. As Chamberlain makes clear, African American workers used the coalition of unions, churches, and civil rights organizations built up during the war to challenge segregation and disenfranchisement in the postwar South.

CHARLES D. CHAMBERLAIN is the museum historian at the Louisiana State Museum and an adjunct professor of history at Tulane University.

"Chamberlain's work opens a window on a chaotic, explosive South, a region in which wartime labor shortages reshuffled the population and placed unprecedented strains on the social and economic workings of Jim Crow segregation. The research is deep, the information fresh, and the writing clear. By focusing on one critical issue—labor power for wartime production—Chamberlain's work sheds new light on the complex dynamics of the southern (and national) economy of the 1940s."—Douglas Flamming

"An important account of the impact of World War II on southern African American workers. Chamberlain describes how they used the economic opportunities the war provided to press their own demands for political and economic justice, and how the wartime experiences of black labor shaped the postwar civil rights struggle."--Nan Elizabeth Woodruff, author of The American Congo: The African American Freedom Struggle in the Arkansas and Mississippi Delta, 1900–1950

"Victory at Home deserves to be on every short list of indispensable books on World War II and race. Researched both broadly and deeply, and persuasively argued, Chamberlain's nuanced account of wartime mobilization and federal manpower policies at both the regional and local levels provides fresh and revealing insights into the war's transformative impact upon the South, as well as penetrating explanations for the region's continuities and retractions. His revisionist view of southern African American goals and strategies during war helps to illuminate both the struggle against white supremacy to come as well as the subsequent massive resistance to that movement."--Harvard Sitkoff, University of New Hampshire

"Whiteness ideology may be fashionable, but Charles D. Chamberlain's Victory at Home reveals the virtues of research in government archives, black newspapers, and labor union records. Chamberlain focuses on the way World War II altered conditions for African American southern workers in the South and in other regions. . . . Chamberlain has produced an important story of migration and economic mobility."--Journal of American History

"Chamberlain has provided an insightful, widely researched study of the shift in southern black labor conditions during WW II. . . . Meriting the attention of anyone interested in the history of the struggle against racism, this book recognizes the government's role while highlighting the courgae and determination of blacks who served the war effort."--Choice

"What emerges from his research is a clearer and fuller understanding of the complexities of race relations in the South, and to a degree, the West, as the United States tried to meet the labor demands of a nation at war . . . Victory at Home should be read by all who are interested in acquiring a greater understanding of the civil rights issue in the South and the home front challenges the nation faced during World War II."--Arkansas Historical Quarterly

"Chamberlain convincingly adds his voice to historians who have shwon how the foundations of the freedom movement of the 1950s and 1960s were laid during World War II. . . . a fine piece of work."--Georgia Historical Quarterly