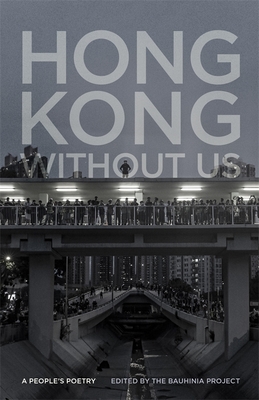 Hong Kong without Us is a decentralized book of revolutionary poetry. Drawn directly from the voices of Hong Kong during its anti-extradition protests, the poems consist of submitted testimonies and found materials--and are all anonymous from end to end, from first speech to translated curation. This collected poetic documentation of protest is thus an authorless work that brings together many voices.

The editors themselves are anonymous poets acting through the Bauhinia Project, an organization created to bring Hong Kong's struggles to the stage of transnational activism through lyric and language, in the same spirit of leaderlessness as the protests. This book is a glimpse into the movement's lives and voices. The poems here were either submitted as testimonies to the Bauhinia Project at an encrypted email address or collected as "found poems" from testimonies and protest materials on the streets, on social media, and on the news. Each was from an anonymous source in Chinese. They are a people's poetry: nameless, lowbrow, temporally bound, squeezed out from moments of gravity and strife. They are meant to reach out across the silence of oceans, through differences in language and culture.