A Room of His Own: A Literary-Cultural Study of Victorian Clubland (Series in Victorian Studies) (Hardcover) 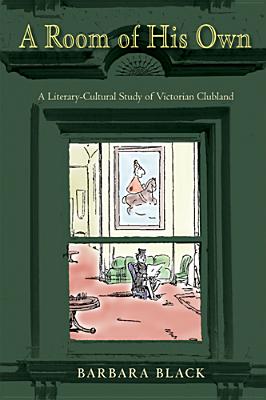 By Barbara Black
Email or call for price

In nineteenth-century London, a clubbable man was a fortunate man, indeed. The Reform, the Athenaeum, the Travellers, the Carlton, the United Service are just a few of the gentlemen’s clubs that formed the exclusive preserve known as “clubland” in Victorian London—the City of Clubs that arose during the Golden Age of Clubs. Why were these associations for men only such a powerful emergent institution in nineteenth-century London? Distinctly British, how did these single-sex clubs help fashion men, foster a culture of manliness, and assist in the project of nation building? What can elite male affiliative culture tell us about nineteenth-century Britishness?

A Room of His Own sheds light on the mysterious ways of male associational culture as it examines such topics as fraternity, sophistication, nostalgia, social capital, celebrity, gossip, and male professionalism. The story of clubland (and the literature it generated) begins with Britain’s military heroes home from the Napoleonic campaign and quickly turns to Dickens’s and Thackeray’s acrimonious Garrick Club Affair. It takes us to Richard Burton’s curious Cannibal Club and Winston Churchill’s The Other Club; it goes underground to consider Uranian desire and Oscar Wilde’s clubbing and resurfaces to examine the problematics of belonging in Trollope’s novels. The trespass of French socialist Flora Tristan, who cross-dressed her way into the clubs of Pall Mall, provides a brief interlude. London’s clubland—this all-important room of his own—comes to life as Barbara Black explores the literary representations of clubland and the important social and cultural work that this urban site enacts. Our present-day culture of connectivity owes much to nineteenth-century sociability and Victorian networks; clubland reveals to us our own enduring desire to belong, to construct imagined communities, and to affiliate with like-minded comrades.

Barbara Black is a professor of English at Skidmore College in Saratoga Springs, New York. She is the author of On Exhibit: Victorians and Their Museums (2000). Her work has appeared in such journals as Nineteenth-Century Contexts, Victorian Poetry, and Salmagundi. She is a contributor to the volume Dickens, Sexuality and Gender, edited by Lillian Nayder.

“(Black’s) book is an absorbing and enlightening study of the importance of clubs to the formation of upper-and upper-middle class Victorian masculinity…. Black deftly reveals how every club is a statement of both exclusion and inclusion; it needs its outsiders to help to define those whom it chooses to let in.”—Times Literary Supplement

“Barbara Black’s ‘Literary-Cultural Study of Victorian Clubland’ fills a notable gap in the existing literature…. She builds a persuasive case for the iconic status of clubs in Victorian literature, drawing on a range of contemporary printed sources, and paying particular attention to the prevalence of clubs in novels. Many novelists chronicling Clubland were also club members and Black effectively connects the real-life club experiences of such writers as Dickens, Galsworthy, Thackeray, Trollope, and Wilde; she highlights their overlapping journalistic, social and personal worlds, while teasing out the broader context of Victorian society.” —Canadian Journal of History

“The strength of (A Room of His Own) lies in establishing Victorian men’s clubs as a culturally specific response to the transformations of British society at a particular phase of modernization.”—Journal of British Studies

“This splendid book boldly lifts the curtain and raises the sash of Victorian private gentlemen’s clubs, which often were more comfortable, intimate, and yet sociable than the prized domestic hearth. According to Professor Black, clubs functio

“Black credits both her own family background and her students' interest in ‘club culture‘ for this intriguing study, which is a major contribution to scholarship on British clubs and their effect upon society and literature…. Thor

“Barbara Black has written a valuable examination of the world of Victorian men’s clubs and their importance to some major novelists of the age…. (An) interesting and useful book.”
— The Victorian Web