Red Nails, Black Skates: Gender, Cash, and Pleasure on and off the Ice (Paperback) 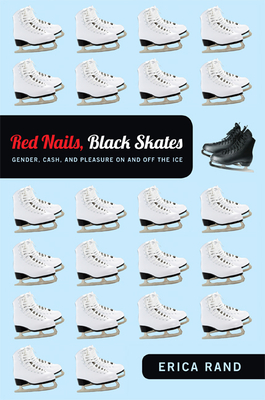 In her forties, Erica Rand bought a pair of figure skates to vary her workout routine. Within a few years, the college professor was immersed in adult figure skating. Here, in short, incisive essays, she describes the pleasures to be found in the rink, as well as the exclusionary practices that make those pleasures less accessible to some than to others. Throughout the book, Rand situates herself as a queer femme, describing her mixed feelings about participating in a sport with heterosexual story lines and rigid standards for gender-appropriate costumes and moves. She chronicles her experiences competing in the Gay Games and at the annual U.S. Adult National Figure Skating Championship, or "Adult Nationals"; Aided by her comparative study of roller derby and women's hockey, including a brief attempt to play hockey herself, she addresses matters such as skate color conventions, judging systems, racial and sexual norms, transgender issues in sports, and the economics of athletic participation and risk taking. Mixing sharp critique with genuine appreciation and delight, Rand suggests ways to make figure skating more inclusive, while portraying the unlikely friendships facilitated by sports and the sheer elation of gliding on ice.

Erica Rand is Professor of Art and Visual Culture and of Women and Gender Studies at Bates College. She is the author of The Ellis Island Snow Globe and Barbie's Queer Accessories, both also published by Duke University Press.