Decolonizing American Spanish: Eurocentrism and the Limits of Foreignness in the Imperial Ecosystem (Pitt Illuminations) (Hardcover) 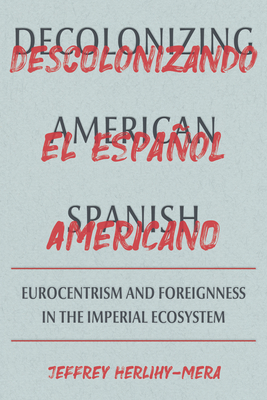 Despite a pronounced shift away from Eurocentrism in Spanish and Hispanic studies departments in US universities, many implicit and explicit vestiges of coloniality remain firmly in place. While certain national and linguistic expressions are privileged, others are silenced with predictable racial and gendered results. Decolonizing American Spanish challenges not only the hegemony of Spain and its colonial pedagogies, but also the characterization of Spanish as a foreign language in the United States. By foregrounding Latin American cultures and local varieties of Spanish and reconceptualizing the foreign as domestic, Jeffrey Herlihy-Mera works to create new conceptual maps, revise inherited ones, and institutionalize marginalized and silenced voices and their stories. Considering the University of Puerto Rico as a point of context, this book brings attention to how translingual solidarity and education, a commitment to social transformation, and the engagement of student voices in their own languages can reinvent colonized education.

Jeffrey Herlihy-Mera is professor in and the director of the Humanities Department at the University of Puerto Rico–Mayagüez. He is the 2022 Obama Fellow at the Obama Institute for Transnational American Studies at Johannes Gutenberg University of Mainz.

“Decolonizing American Spanish is a superb analysis of the coloniality at the core of hegemonic representations of Spanish in the United States today, both inside and outside the academy. It engages critically the overwhelming perception of Spanish as foreign language in the country as well as the overrepresentation of Spain in Hispanic Studies, among other ideologies and practices that reproduce racist linguistic and social structures. Most importantly, this wonderful text demonstrates what is to be gained by delinking from Eurocentric perspectives and from nation-based and dominant area studies approaches: the engagement with language as a living reality at the heart of communities, many of which provide magnificent examples of countering and combatting coloniality.”  —Nelson Maldonado-Torres, Rutgers University, New Brunswick

“Spanish is one of the six imperial/colonial languages of Western modernity since 1500. Currently, it shares with English the second/third places of most-spoken language on the planet after Mandarin. It is the national language of Spain and of all former colonies of Spanish America and the Caribbean, and it is already a national (not a foreign) language in the United States. Jeffrey Herlihy-Mera makes a compelling argument underscoring the coloniality of language hierarchies in higher education and, by implication, the scholarly and racial consequences of such hierarchy as well as the subjective and emotional impact of such hierarchy in students, faculty, and administrators as well as in the public sphere. Because of it, the argument of Decolonizing American Spanish has to be made in English.” —Walter D. Mignolo, author of The Politics of Decolonial Investigations