Remembering Simplified Hanzi 2: How Not to Forget the Meaning and Writing of Chinese Characters (Paperback) 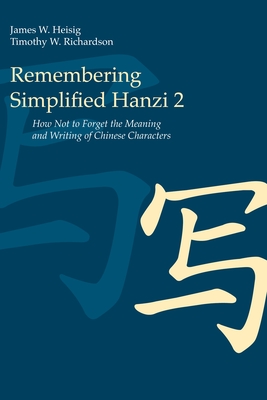 This book is the second of two volumes designed to help students learn the meaning and writing of the 3,000 most frequently used simplified Chinese characters. (A parallel set of volumes has been prepared for traditional characters.) The 1,500 characters introduced in Book 1 include the top 1,000 by frequency, plus another 500 best learned at an early stage. Book 2 adds the remaining 1,500 characters to complete the set.

The lessons of Book 2 have been arranged in such a way that they may be studied either after those of Book 1 or simultaneously with them. Students who wish to focus initially on the 1,000 most frequently used characters in the language can do so by studying Book 1 before moving on to Book 2. Many, if not most, learners will find this preferable. Students who wish to apply the logical ordering found in these pages to the entire list of 3,000 characters from the very beginning can take the more exacting, but also more rationally satisfying, approach of studying the parallel lessons of the two volumes together. The lessons in this book are followed by two short, additional sections, one that introduces a number of "compounds," or characters that are best learned in pairs, and another that adds two "postscripts." The book also includes a number of comprehensive indexes that are designed to facilitate work with both volumes.
Of central importance to the approach found in these pages is the systematic arranging of characters in an order best suited to memory. In the Chinese writing system, strokes and simple components are nested within relatively simple characters. These characters, in turn, can serve as parts of more complicated characters, and so on. Taking advantage of this allows a logical ordering, making it possible for students to approach most new characters with prior knowledge that can greatly facilitate the learning process. Guidance and detailed instructions are provided all along the way. Students are taught to employ "imaginative memory" to associate each character's component parts or "primitive elements" with one another and with a key word that has been carefully selected to represent an important meaning of the character. This is accomplished through creation of a "story" that engagingly ties the primitive elements and key word together. In this way, the collections of dots, strokes and components that make up the characters are associated in memorable ways, dramatically shortening the time required for learning and helping prevent characters from slipping out of memory.