Rube Tube: CBS and Rural Comedy in the Sixties (Hardcover) 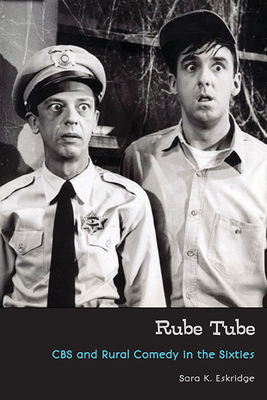 By Sara K. Eskridge
Email or call for price

Historian Sara Eskridge examines television’s rural comedy boom in the 1960s and the political, social, and economic factors that made these shows a perfect fit for CBS. The network, nicknamed the Communist Broadcasting System during the Red Scare of the 1940s, saw its image hurt again in the 1950s with the quiz show scandals and a campaign against violence in westerns. When a rival network introduced rural-themed programs to cater to the growing southern market, CBS latched onto the trend and soon reestablished itself as the Country Broadcasting System. Its rural comedies dominated the ratings throughout the decade, attracting viewers from all parts of the country. With fascinating discussions of The Andy Griffith Show, The Beverly Hillbillies, Petticoat Junction, and other shows, Eskridge reveals how the southern image was used to both entertain and reassure Americans in the turbulent 1960s.

Sara K. Eskridge is a writer and historian of the U.S. South, television, and popular culture. She is an instructor at Western Governors University and lives near Richmond, Virginia.

“Rube Tube is a lucid, well-argued account of CBS’s programming strategies in the early days of television. The author provides context for understanding the choices and motivations behind programs that have become part of our shared cultural experience.”—Joanna Morreale, editor of Critiquing the Sitcom:A Reader

"Sara Eskridge has written a detailed and illuminating study of television programming in the network-broadcast era, very insightfully focused through the construction and use of “rural” America as a political and social wedge in the network image competition and ratings wars that defined the first quarter century of the television medium. It is highly recommended to all students of the medium, especially those interested on the ways in which television shapes and employs national narratives."—Alan Nadel, author of Television in Black-and-White America and Demographic Angst: Cultural Narratives and American Films of the 1950s

"Rube Tube thoroughly explores the parade of Southern-based rural sitcoms on CBS in the 1960s that dominated the ratings and left a lasting imprint on the televised landscape. Extending well beyond the shows themselves, Eskridge thoughtfully articulates what the rise and fall of these programs reveal about the era’s shifting racial and political perceptions and realities, and how their demise marked a fundamental reimagining of the television audience. Anyone interested in 1960s television and culture and the enduring appeal of the televised rural Southerner will find this carefully researched and engagingly written book a valuable read."—Anthony Harkins, Western Kentucky University and author of Hillbilly: A Cultural History of an American Icon

"A very thoughtful, unique, and fascinating book."—Journal of Appalachian Studies

“Well-researched and clearly written . . . . Eskridge thoroughly and convincingly demonstrates the value of studying television’s rural comedies as more than simply 'throwaway entertainment.'”—Kansas History: A Journal of the Central Plains