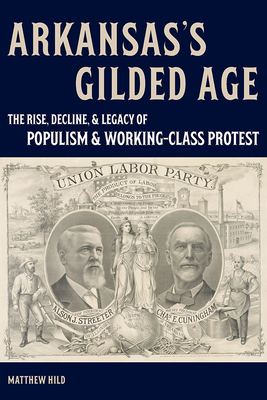 By Matthew Hild
Email or call for price

This book is the first devoted entirely to an examination of working-class activism, broadly defined as that of farmers’ organizations, labor unions, and (often biracial) political movements, in Arkansas during the Gilded Age. On one level, Hild argues for the significance of this activism in its own time: had the Arkansas Democratic Party not resorted to undemocratic, unscrupulous, and violent means of repression, the Arkansas Union Labor Party would have taken control of the state government in the election of 1888. He also argues that the significance of these movements lasted beyond their own time, their influence extending into the biracial Southern Tenant Farmers’ Union of the 1930s, the civil rights movement of the 1950s and 1960s, and even today’s Farmers’ Union and the United Mine Workers of America.

The story of farmer and labor protest in Arkansas during the late nineteenth century offers lessons relevant to contemporary
working-class Americans in what some observers have called the “new Gilded Age.”

Matthew Hild teaches U.S. history and the history of technology and science at the Georgia Institute of Technology in Atlanta. He also teaches U.S. and Georgia history at the University of West Georgia in Carrollton and is the author of Greenbackers, Knights of Labor, and Populists: Farmer-Labor Insurgency in the Late-Nineteenth-Century South. He lives in Atlanta, Georgia.

“Not only a unique contribution to Arkansas history but also, I think, a significant addition to what we know of protest movements nationally during the late nineteenth century.”—Carl H. Moneyhon, Professor of History, University of Arkansas–Little Rock; author of Arkansas and the New South, 1874–1929

"During the Gilded Age, the drama of farmer, labor, and populist politics unfolded with extraordinary force in the rural, impoverished, and racially fractured state of Arkansas. Matthew Hild brings to bear his superb skills as an historian to explore this drama in all of its at times brutal complexity. Anyone interested in the history of working class and farmer politics, and why they matter today, should read this book."—Charles Postel, author of The Populist Vision

"With Arkansas’s Gilded Age, Matthew Hild has given us the first modern account of the long farmer-labor movement in a too-long ignored state.  Unlike, say, North Carolina to the east and Texas to the west, in Arkansas insurgent politics was often driven by organized labor, and the heyday of the movement took place in the 1880s rather than the 1890s. Hild’s account reminds us that no two states, even in the supposedly one-party South, were alike. A model of clear writing and thoughtful analysis, this book is a welcome addition to the growing body of work on working-class politics in the late-nineteenth- and early-twentieth-century South."—Gregg Cantrell, Professor of history at Texas Christian University

“This book was genuinely a joy to read, and the author strikes just the right balance—celebrating the victories working-class organizations achieved while never minimizing the astounding odds they faced when confronting entrenched power.”—Guy Lancaster, editor of the Encyclopedia of Arkansas History & Culture, Central Arkansas Library System; author of Racial Cleansing in Arkansas, 1883–1924: Politics, Land, Labor, and Criminality

"A fascinating and insightful study of producerist politics in the era of emancipation. In fact, it is among the best of such studies available."—Michael Pierce, Journal of the Gilded Age and Progressive Era

"...we finally have here a volume that brings the disparate parts of [Arkansas's] 'Populist moment' together in a single narrative. Matthew Hild's new research into the significance of industrial labor and the role of working-class African Americans in this political protest, moreover, fills us in on major parts of the story that have been missing. —Blake Perkins, Professor of History at Williams Baptist University

“This work by Dr. Hild is a much-needed study of southern, working-class protest movements. Arkansas’s Gilded Age fills a serious void in the scholarship and should remove all doubt as to the lasting importance of these third-party reform elements. The work is well written and impeccably researched—an important read for any scholar of US History.”—The Chronicles of Oklahoma