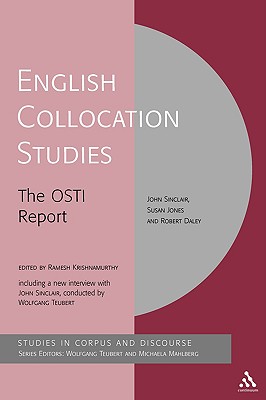 This is the first published edition of John Sinclair, Susan Jones and Robert Daley's research on collocation undertaken in 1970. The unpublished report was circulated amongst a small group of academics and was enormously influential, sparking a growth of interest in collocation amongst researchers in linguistics. Collocation was first viewed as important in computational linguistics in the work of Harold Palmer in Japan. Later M.A.K. Halliday and John Sinclair published on collocation in the 1960s. English Collocation Studies is a report on empirical research into collocation, devised by Halliday with Sinclair acting as the Principal Investigator and editor of the resultant OSTI report. The present edition contains an introduction by Professor Wolfgang Teubert based on his interview with John Sinclair. The introduction assesses the extent to which the findings of the original research have developed in the intervening years, and how some of the techniques mentioned in the report were implemented in the COBUILD project at Birmingham University in the 1980s.

Ramesh Krishnamurthy is a lecturer in English Studies, Aston University. Susan Jones is at the Department of Informatics, London City University. John Sinclair (1933-2007) was President of the Tuscan Word Centre, Italy and held the title Professor Emeritus of Modern English Language, University of Birmingham, UK