Drug Cartels Do Not Exist: Narcotrafficking in Us and Mexican Culture (Hardcover) 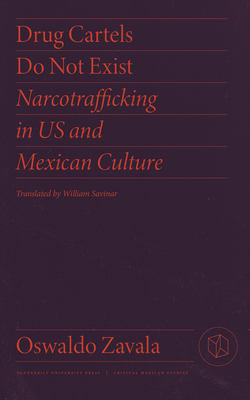 Through political and cultural analysis of representations of the so-called war on drugs, Oswaldo Zavala makes the case that the very terms we use to describe drug traffickers are a constructed subterfuge for the real narcos: politicians, corporations, and the military. Though Donald Trump's incendiary comments and monstrous policies on the border revealed the character of a deeply depraved leader, state violence on both sides of the border is nothing new. Immigration has endured as a prevailing news topic, but it is a fixture of modern society in the neoliberal era; the future will be one of exile brought on by state violence and the plundering of our natural resources to sate capitalist greed. Yet the realities of violence in Mexico and along the border are obscured by the books, films, and TV series we consume. In truth, works like Sicario, The Queen of the South, and Narcos hide Mexico's political realities. Alongside these examples, Zavala discusses Charles Bowden, 2666 by Roberto Bola o, and other important Latin American writers as examples of those who do capture the realities of the drug war. Translated into English by William Savinar, Drug Cartels Do Not Exist will be useful for journalists, political scientists, philosophers, and writers of any kind who wish to break down the constructed barriers--physical and mental--created by those in power around the reality of the Mexican drug trade.

Oswaldo Zavala is a professor of contemporary Latin American literature and culture with a joint appointment at the College of Staten Island and at The Graduate Center, both institutions part of the City University of New York (CUNY). William Savinar is a writer, translator, and English teacher living in Mexico City.