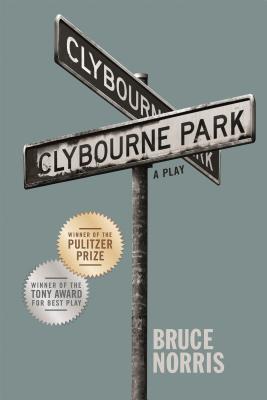 Clybourne Park spans two generations fifty years apart. In 1959, Russ and Bev are selling their desirable two-bedroom at a bargain price, unknowingly bringing the first black family into the neighborhood (borrowing a plot line from Lorraine Hansberry's A Raisin in the Sun) and creating ripples of discontent among the cozy white residents of Clybourne Park. In 2009, the same property is being bought by a young white couple, whose plan to raze the house and start again is met with equal disapproval by the black residents of the soon-to-be-gentrified area. Are the issues festering beneath the floorboards actually the same, fifty years on? Bruce Norris's excruciatingly funny and squirm-inducing satire explores the fault line between race and property.

Bruce Norris is a writer and an actor whose Pulitzer Prize- and Olivier Award-winning play Clybourne Park premiered at Playwrights Horizons in January 2010. Other plays include The Infidel, Purple Heart, We All Went Down to Amsterdam, The Pain and the Itch, and The Unmentionables, all of which premiered at Steppenwolf Theatre. Norris is the recipient of the 2009 Steinberg Playwright Award and the Whiting Foundation Prize for Drama. He resides in New York.

“Courageous…Norris's elegantly structured play nails marital tensions as much as it does racial disharmony in an evening of ebullient provocation.” —Lyn Gardner, The Guardian