Retromania: Pop Culture's Addiction to Its Own Past (Paperback) 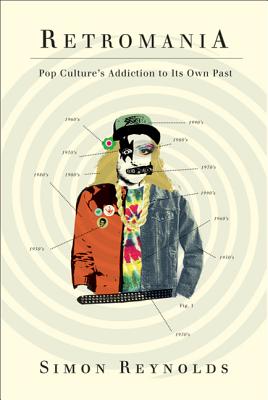 One of The Telegraph's Best Music Books 2011

We live in a pop age gone loco for retro and crazy for commemoration. Band re-formations and reunion tours, expanded reissues of classic albums and outtake-crammed box sets, remakes and sequels, tribute albums and mash-ups . . . But what happens when we run out of past? Are we heading toward a sort of culturalecological catastrophe where the archival stream of pop history has been exhausted?

Simon Reynolds, one of the finest music writers of his generation, argues that we have indeed reached a tipping point, and that although earlier eras had their own obsessions with antiquity—the Renaissance with its admiration for Roman and Greek classicism, the Gothic movement's invocations of medievalism—never has there been a society so obsessed with the cultural artifacts of its own immediate past. Retromania is the first book to examine the retro industry and ask the question: Is this retromania a death knell for any originality and distinctiveness of our own?

Simon Reynolds is a music critic whose writing has appeared in The New York Times, The Village Voice, Spin, Rolling Stone, and Artforum. He is the author of books including Retromania and Rip It Up and Start Again.

“Looking back over the last 25 years you'd be hard pressed to name a music journalist more adept at tracking and defining the zeitgeist.” —Dave Haslam, The Guardian

“Simon Reynolds, one of our most thoughtful music writers, poses a stark question for anyone who cares about the future of pop . . . A devastating critique of the way music is now consumed.” —Patrick Sawer, The Daily Telegraph

“Bracingly sharp. As a work of contemporary historiography, a thick description of the transformations in our relationship to time--as well as to place--Retromania deserves to be very widely read.” —Sukhdev Sandhu, The Observer (London)

“A provocative and original inquiry into the past and future of popular music.” —Booklist (starred review)

“If anyone can make sense of pop music's steady mutation from what George Melly noted as its ‘worship of the present,' to its current status as a living heritage industry where past, present and what the author calls a nostalgia for a lost future coexist, then you'd have to trust Reynolds. He's a top-table critic whose keen ear is matched by a sharp eye for cultural context . . . An erudite study of pop's eternal lock groove.” —Mark Paytress, Mojo

“Retromania is a terrific book. Reynolds brings profound knowledge and oceanic depth and width to his argument, tracing his theme from trad jazz through the '70s rock and roll boom to the hipsterism of today, via the hyper-connectedness and infinite jukebox of the web. Unlike many of the pop writers who inspired him as a youth, he deploys his high intelligence and vast range of reference lucidly, to argue and illuminate, not dazzle or alienate.” —Steve Yates, The Word

“If I had to choose just one commentator to guide me through the last quarter-century of popular (and not so popular) music, it would have to be--on the basis of depth of knowledge, range of reference, soundness of judgment, and fluency of style--Simon Reynolds.” —Geoff Dyer, author of Jeff in Venice, Death in Varanasi

“If pop music is all about right now, what happens when the past refuses to go quietly? The ever-brilliant Simon Reynolds investigates the cult of retro, the temptations of nostalgia, and the future of music culture--all with a detective's cold eye and a fan's hot heart.” —Rob Sheffield, author of Love Is a Mixtape

“One of my favorite music writers wrestles one of my favorite musical paradoxes: What's up with the fetish for the Old in pop's Land of the Eternal New? Unpacking how YouTube makes history more lateral than linear, pondering the remarkable endurance of England's Northern Soul scene, or wondering if record collecting is indeed a distinctly masculine sickness, Reynolds's deep inquiries lead to a bigger question: Does obsessive engagement with the past make it harder to invent the future?” —Will Hermes, author of Love Goes to Buildings on Fire

“The crowning achievement of Retromania is that it in no way contributes to the cultural malaise it critiques. You may struggle with the suspicion that you've seen it all before and heard it all before--but you've never read anything that approaches the idea of retro from as many entertaining and incisive angles. The present may be collapsing into the past, but this is a book for the ages.” —Greg Milner, author of Perfecting Sound Forever