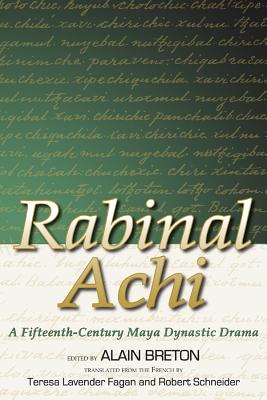 The Rabinal Achi, one of the most remarkable works of Mayan literature, dates back to the 1400s. In 2005, UNESCO declared Rabinal Achi to be a Masterpiece of the Oral and Intangible Heritage of Humanity. This drama is still performed with a ritual dance in the village of Rabinal (Baja Verapaz). The drama is set in the Guatemalan highlands in the second half of the fifteenth century. In an exemplary trial that takes place in Kajyub, the capital of the Rabinaleb at that time, a captured enemy warrior (Quiche Achi) appears before the royal court. A series of combative dialogues pits the offending warrior against the local warrior (Rabinal Achi) and the king (Job Toj), reconstructing the deeds of those involved and retracing the antagonistic history of these two Mayan groups, the Quiche and the Rabinaleb. Alain Breton approaches the text from an anthropological and ethnographical perspective, demonstrating that this indigenous text reenacts pre-Columbian historic paradigms. Breton's work is based on the Perez Manuscript (1913), a facsimile of which is included in its entirety. Breton translated into French an entirely new transcription of the original text, and Teresa Lavender Fagan and Robert Schneider translated the text into English. Both the transcription and the translation are accompanied by detailed commentary and a glossary.

Alain Breton is Research Director at the Centre National de la Recherche Scientifique in France. He is the author or co-author of fifteen books.