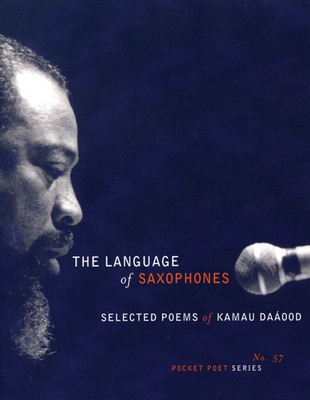 A long-awaited collection from a pioneer of the spoken word movement, these poems soar and sway with the syncopation and melodies of jazz. Portraits, chronicles, incantations and invocations, drawn from a lifetime of prolific activity.

From his early days in the Black Arts Movement and up to the present, Daaood has been a powerful artistic and social force, an inspired seer/seeker. Whether collaborating with renowned musicians, heading up a performance group or inspiring and nurturing new talent, he speaks to and from the urgency of his time.

Saxophones offers a good sample of the work that has made Da ood such a respected figure among black poets, and among all poets who take their role as bards and teachers straight, no irony. Early poems establish a voice as one that is at once fiery and philosophical, scattershot but continually looking for order and reason in a landscape usually devoid of it . . . --The LA Weekly

Jazz at its core is cosmic, and Da ood taps into its unifying vision in his powerfully percussive, prayerful, firmly rooted yet soaring, direct and accessible poetry . . . In this slender but mighty retrospective volume covering four decades, he offers burning social critique . . . --Booklist

"A powerful collection, broken into sections ranging from 1970 through 2004, Da ood takes us on a dance with him, revisiting each era, sharing his insights. Vivid images come to mind as the poems are read, reflecting on his artistic nature. Woven like an intricate web, he chronicles his anger against racism and injustices, while at the same time, allows us to witness his influence on others. Like a sensuous dance, the poems go up and down, seemingly getting better as they progress, allowing the reader to hold onto a piece of time in the process."--www.rawsistaz.com

There are prophets among us and Kamau Da ood is one of them. His poems are psalms. His language shimmers, raging against injustice and racism, yet held in tender balance. His images are irridescent and deep with river song. His art is an abiding love for the world. His genius is that he believes it. After you are blessed by this book, you too will believe.--Chris Abani, author of GraceLand and Dog Woman

Long before poetry slams became the literary equivalent of monster-truck rallies, City Lights Press was at the heart of San Francisco's poetry renaissance, putting out volumes by Jack Kerouac, Allen Ginsberg and Anne Waldman - the true founders of the so-called spoken word movement. All of these writers appeared in the Pocket Poet series, which could fit in a jeans pocket and made a perfect companion for cross-country jaunts. The series survives, and the latest addition is Kamau Daaood's The Language of Saxophones, a book so hip and full of soul even Miles Davis would have treated it with respect.--John Freeman, Milwaukee Journal Sentinel

Kamau Daaood, performance poet and community arts activist, is the artistic director of Los Angeles' World Stage Performance Gallery, which he co-founded with master drummer Billy Higgins. His work can be heard on his award-winning CD Leimert Park.