The Bell Tolls for No One (Paperback) 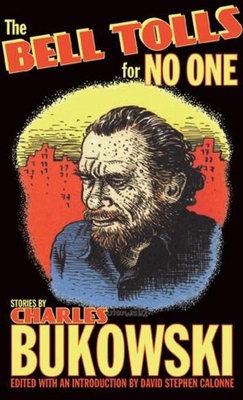 The uncollected gutbucket ramblings of the grand dirty old man of Los Angeles letters have been gathered in this characteristically filthy, funny compilation ... Bukowkski's gift was a sense for the raunchy absurdity of life, his writing a grumble that might turn into a belly laugh or a racking cough but that always throbbed with vital energy.--Kirkus Reviews

From the self-illustrated, unpublished work written in 1947 to hardboiled contributions to 1980s adult magazines, The Bells Tolls for No One presents the entire range of Bukowski's talent as a short story writer, from straight-up genre stories to postmodern blurring of fact and fiction. An informative introduction by editor David Stephen Calonne provides historical context for these seemingly scandalous and chaotic tales, revealing the hidden hand of the master at the top of his form.

Born in Andernach, Germany, and raised in Los Angeles, Charles Bukowski published his first story when he was twenty-four and began writing poetry at the age of thirty-five. His first book of poetry was published in 1959; he would eventually publish more than forty-five books of poetry and prose. He died of leukemia in San Pedro, California on March 9, 1994.

David Stephen Calonne is the author of several books and has edited three previous collections of the uncollected work of Charles Bukowski for City Lights: Absence of the Hero, Portions from a Wine-Stained Notebook, and More Notes of a Dirty Old Man.

Charles Bukowski was born in Andernach, Germany on August 16, 1920, the only child of an American soldier and a German mother. At the age of three, he came with his family to the United States and grew up in Los Angeles. He attended Los Angeles City College from 1939 to 1941, then left school and moved to New York City to become a writer. His lack of publishing success at this time caused him to give up writing in 1946 and spurred a ten-year stint of heavy drinking. After he developed a bleeding ulcer, he decided to take up writing again. He worked a wide range of jobs to support his writing, including dishwasher, truck driver and loader, mail carrier, guard, gas station attendant, stock boy, warehouse worker, shipping clerk, post office clerk, parking lot attendant, Red Cross orderly, and elevator operator. He also worked in a dog biscuit factory, a slaughterhouse, a cake and cookie factory, and he hung posters in New York City subways. Bukowski published his first story when he was twenty-four and began writing poetry at the age of thirty-five. His first book of poetry was published in 1959; he went on to publish more than forty-five books of poetry and prose, including Pulp (Black Sparrow, 1994), Screams from the Balcony: Selected Letters 1960-1970 (1993), and The Last Night of the Earth Poems (1992). He died of leukemia in San Pedro on March 9, 1994. David Stephen Calonne was born in Los Angeles in 1953. He earned a B.A. in Ancient Greek from UCLA and a doctorate in English at the University of Texas at Austin where he wrote his dissertation on the works of William Saroyan. He has written several other books on writers including Henry Miller and Charles Bukowski. A new critical study of Miller will appear from Reaktion Press in London in September of 2014. He is the editor of three volumes of Bukowski's uncollected prose for City Lights. He has lectured in Paris, at Columbia University, Penn, Berkeley, Harvard, and Oxford.