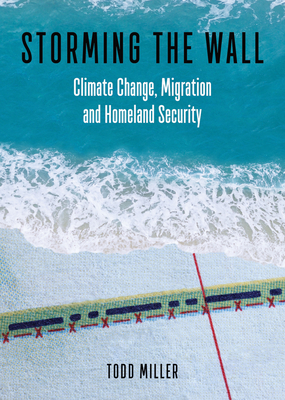 You can tell Todd Miller is a journalist because he writes very compellingly. Both terrifying and hopeful, Miller documents a permaculture project on the border between Mexico and Texas, as well as climate activists in the Philipines and other global sites of conflict impacted by climate change. One of the best books I have read on climate change and borders.

RECIPIENT OF THE 2018 IZZY AWARD FOR EXCELLENCE IN INVESTIGATIVE JOURNALISM

"Every so often a book comes along that can dramatically change, or elevate, one's thinking about a global problem. Much like Naomi Klein's books, Todd Miller's Storming the Wall is such a book and deserves far more attention and discussion."--Izzy Award Judges, Ithaca College

"A galvanizing forecast of global warming's endgame and a powerful indictment of America's current stance."--Kirkus Reviews

As global warming accelerates, droughts last longer, floods rise higher, and super-storms become more frequent. With increasing numbers of people on the move as a result, the business of containing them--border fortification--is booming.

In Storming the Wall, Todd Miller travels around the world to connect the dots between climate-ravaged communities, the corporations cashing in on border militarization, and emerging movements for environmental justice and sustainability. Reporting from the flashpoints of climate clashes, and from likely sites of futures battles, Miller chronicles a growing system of militarized divisions between the rich and the poor, the environmentally secure and the environmentally exposed. Stories of crisis, greed and violence are juxtaposed with powerful examples of solidarity and hope in this urgent and timely message from the frontlines of the post-Paris Agreement era.

Todd Miller's writings about the border have appeared in the New York Times, Tom Dispatch, and many other places.

Praise for Storming the Wall

"Nothing will test human institutions like climate change in this century--as this book makes crystal clear, people on the move from rising waters, spreading deserts, and endless storms could profoundly destabilize our civilizations unless we seize the chance to re-imagine our relationships to each other. This is no drill, but it is a test, and it will be graded pass-fail"--Bill McKibben, author Eaarth: Making a Life on a Tough New Planet

"As Todd Miller shows in this important and harrowing book, climate-driven migration is set to become one of the defining issues of our time.... This is a must-read book."--Christian Parenti, John Jay College of Criminal Justice, author of Tropic of Chaos: Climate Change and the New Geography of Violence

"Todd Miller reports from the cracks in the walls of the global climate security state--militarized zones designed to keep powerful elites safe from poor and uprooted peoples.... Miller finds hope--hope that may not survive in Trumpworld."--Molly Molloy, Research librarian for Latin America and the border at New Mexico State University and creator of "Frontera List"

"Miller delivers a prescient and sober view of our increasingly dystopian planet as the impacts of human-caused climate disruption continue to intensify."--Dahr Jamail, award-winning independent journalist, author of The End of Ice

"Todd Miller's important book chronicles how existing disparities in wealth and power, combined with the dramatic changes we are causing in this planet's ecosystems, mean either we come together around our common humanity or forfeit the right to call ourselves fully human."--Robert Jensen, author of The End of Patriarchy, Plain Radical, and Arguing for Our Lives

For the past fifteen years Todd Miller has researched, written about, and worked on immigration and border issues from both sides of the U.S. Mexico divide for organizations such as BorderLinks, Witness for Peace, and NACLA. He did the brunt of this work in Tucson, Arizona and Oaxaca, Mexico, with stints in New York City sprinkled in. Between Tucson and the Buffalo/Niagara Falls region of New York state where he grew up, he has spent the majority of his life close to the U.S. international boundary, south and north. He is the author of Border Patrol Nation (City Lights, 2014), and his writings about the border have appeared in the New York Times, TomDispatch, Mother Jones, The Nation, Al Jazeera English, and Salon among other places.