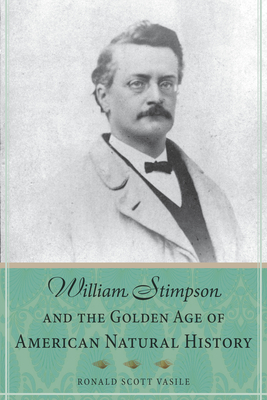 By Ronald Scott Vasile
Email or call for price

William Stimpson was at the forefront of the American natural history community in the latter half of the nineteenth century. Stimpson displayed an early affinity for the sea and natural history, and after completing an apprenticeship with famed naturalist Louis Agassiz, he became one of the first professionally trained naturalists in the United States. In 1852, twenty-year-old Stimpson was appointed naturalist of the United States North Pacific Exploring Expedition, where he collected and classified hundreds of marine animals. Upon his return, he joined renowned naturalist Spencer F. Baird at the Smithsonian Institution to create its department of invertebrate zoology. He also founded and led the irreverent and fun-loving Megatherium Club, which included many notable naturalists. In 1865, Stimpson focused on turning the Chicago Academy of Sciences into one of the largest and most important museums in the country. Tragically, the museum was destroyed in the Great Chicago Fire of 1871, and Stimpson died of tuberculosis soon after, before he could restore his scientific legacy.

This first-ever biography of William Stimpson situates his work in the context of his time. As one of few to collaborate with both Agassiz and Baird, Stimpson’s life provides insight into the men who shaped a generation of naturalists—the last before intense specialization caused naturalists to give way to biologists. Historians of science and general readers interested in biographies, science, and history will enjoy this compelling biography.

Ronald Scott Vasile teaches AP US history and anthropology at Lockport Township High School in Lockport, Illinois. He has worked as a collections manager and archivist at the Chicago Academy of Sciences and as a public historian focusing on the Illinois & Michigan Canal. He is coeditor of William Stimpson’s North Pacific Journal.

“This is an excellent study of a neglected figure in natural history. Stimpson worked alongside some of the scientific giants of his time and was affiliated with some of the most prestigious scientific institutions this country has developed.”
—Joel Greenberg, author of A Feathered River Across the Sky: The Passenger Pigeon’s Flight to Extinction

“There are very few works about mid-nineteenth century US natural history. Vasile has done an impressive job recreating Stimpson’s contributions by combing through archives, thus reconstructing admirably much of Stimpson’s career. The author’s careful argument clearly illustrates the centrality of this important observer of the natural world.”
—Keith R. Benson, coeditor of The Expansion of American Biology