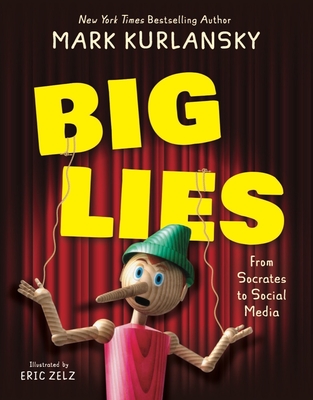 A KIRKUS' SELECTION FOR BEST TEEN & YA NONFICTION 2022

NAMED ONE OF KIRKUS' BEST BOOKS OF THE YEAR: Impassioned, thorough, and brilliant: describes the struggle for truth that “keeps the world from descending into chaos.”

In his new book for young readers Mark Kurlansky’s lens is the art of the “big lie,” a term coined by Adolf Hitler. Kurlansky has written Big Lies: From Socrates to social media for the next stewards of our world. It is not only a history but a how-to manual for seeing through big lies and thinking critically.

Mark Kurlansky’s bestselling works of nonfiction view the history of the world through unexpected lenses, including cod, salt, and paper. In this new book for young readers his lens is the art of the big lie. Big lies are told by governments, politicians, and corporations to avoid responsibility, cast blame on the innocent, win elections, disguise intent, create chaos, and gain power and wealth. Big lies are as old as civilization. They corrupt public understanding and discourse, turn science upside down, and reinvent history. They prevent humanity from addressing critical challenges. They perpetuate injustices. They destabilize the world.

As with his book World Without Fish, Kurlansky has written A History of Big Lies for young readers, the future stewards of our world. It is not only a history but a how-to manual for seeing through big lies and thinking critically. “I hope that you will keep asking yourself what is true as you read this book and live your life,” he entreats readers at the outset. “If the Age of Enlightenment is not to be followed by the Age of Chaos, we have to think for ourselves.”

A History of Big Lies soars across history, alighting on the “noble lies” of Socrates and Plato, Nero blaming Christians for the burning of Rome, the great injustices of the Middle Ages, the big lies of Stalin and Hitler and their terrible consequences, and the reckless lies of contemporary demagogues, which are amplified through social media. Lies against women and Jews are two examples in the long history of “othering” the vulnerable for personal gain. Nor does America escape Kurlansky’s equal-opportunity spotlight.

The modern age has provided ever-more-effective ways of spreading lies, but it has also given us the scientific method, which is the most effective tool for finding what is true. In the book’s final chapter, Kurlansky reveals ways to deconstruct an allegation. Is there credible, testable evidence to support it? If not, suspect a lie. A scientific theory has to be testable, and so does an allegation. Who is the source? Who benefits? Is there a money trail? Especially in the age of social media, critical thinking counters lies and chaos.

“Belief is a choice,” Kurlansky writes, “and honesty begins in each of us. A lack of caring what is true or false is the undoing of democracy. The alternative to truth is a corrupt state in which the loudest voices and most seductive lies confer power and wealth on grifters and oligarchs. We cannot achieve a healthy planet for all the world’s people if we do not keep asking what is true.”

Mark Kurlansky worked as a commercial fisherman, longshoreman, paralegal, cook, pastry chef, and playwright, then traveled the world as a journalist and foreign correspondent for The International Herald Tribune, The Chicago Tribune, The Miami Herald, and The Philadelphia Inquirer. Based in Paris and then Mexico, he reported on Europe, West Africa, Southeast Asia, Central America, Latin America, and the Caribbean from 1976 to 1991. His thirty-four books for adults and young readers include four New York Times bestsellers (Cod; Salt; 1968; and The Food of a Younger Land) and have been translated into thirty languages. He has received a James Beard Award for Food Writing, a Bon Appétit American Food and Entertaining Award for Food Writer of the Year, and the Glenfiddich Food and Drink Award for Food Book of the Year. A master storyteller, Kurlansky is equally adept at writing for children and adults. The New York Times called World Without Fish “a compelling narrative for young people.”

Eric Zelz is a designer, illustrator, and educator whose work has been recognized by organizations including the Society of Environmental Journalists and the Society of News Design. His illustrations for three Tilbury House picture books (Pass the Pandowdy, Please; Read This Book If You Don’t Want a Story; and My Monster Moofy) have received awards and starred reviews. See more at ericzelz.com.

This well-researched book offers examples of philosophers and religious leaders commenting on lying as well as politicians and advertisers manipulating others for personal gain. Kurlansky writes persuasively about the danger of big, outrageous lies that can have horrific consequences. He points out that those lies have become more common and more easily spread since the advent of social media, but the lies themselves have changed little through the centuries. The text is detailed, well organized, and relevant to our times. Kurlansky does a particularly fine job of placing disturbing recent trends within a historical context. Many books advise young people on recognizing propaganda techniques, but this one offers a particularly broad view of how and why political leaders, hucksters, and others with personal or political agendas lie, how technological changes have magnified the lies’ effectiveness, and how critical thinking skills enable people to recognize the big lies that can threaten a free society.

Starred Review: In this noteworthy guide to media literacy, Kurlansky (Bugs in Danger) details events occurring over the past 300 years to break down the “big lies” that permeate global history and explore how they affect the current U.S. media landscape. Positing that the “explosion of social media seems to have ushered us into a new age of lying,” the author explains that though current technology makes it easier and faster to spread misinformation, it’s not wholly responsible for the rise of false ideas, and that “most of the lies themselves aren’t new.” Using examples throughout history, such as the Salem witch trials, Stalin’s and Hitler’s anti-Semitic rhetoric, and the Turkish denial of the Armenian genocide, Kurlansky breaks down how politicians have repeatedly used propaganda and misinformation to control public perception, and offers a checklist for differentiating fact from fiction. Zelz’s (My Monster Moofy) emotive, full-color art depicts humorous caricature portraits of historic thinkers, including Isaac Newton and Charles Darwin, and distills ideas presented throughout the narrative via comics spreads at chapters’ end. Employing conversational prose, cohesive timelines, and digestible examples, the creators encourage readers to think critically, citing that a “lack of caring what is true or false is the undoing of democracy.” Ages 13–up.


Impassioned, thorough, and brilliant: describes the struggle for truth that “keeps the world from descending into chaos”.

Deceit, says noted nonfiction writer Kurlansky, is practiced throughout the living world, often conferring evolutionary advantages, and certainly many social ones—consider the white lie. Three hundred years ago, the rise of the Enlightenment ushered in both a new era of scientific reason and a corresponding rise in lies and conspiracy theories promulgated by power-hungry individuals attempting to dupe the masses. Today’s social media makes this ever more prevalent but also gives those who pay attention tools they can use to broadcast the truth. From murderous clowns to lizard people in government, burning women as witches to persistent scapegoating of Jews, Kurlansky covers the types, tools, targets, tactics, and motives of liars as well as arms readers with defensive techniques such as searching for sources and the classic advice to “follow the money.” Supplemental stories are told in sidebars set off in orange type. Blocks of larger, colorful type break up the pages, as do occasional illustrations and photographs. Short comic-strip segments enliven the ends of each chapter, illustrating Soviet spies sowing anti-vaccine disinformation and showing a dishonest, bankrupt real estate investor denying climate change. This book takes on a dense and complicated subject; Kurlansky’s genius is to embrace the complexity and urge readers to question everything they read, including this book. (photo credits, author’s note, sources, index) (Nonfiction. 12-18)