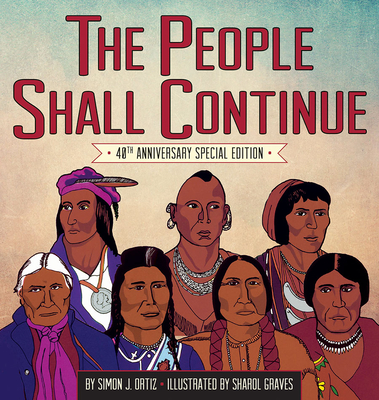 Republished for its fortieth anniversary, this powerful story by renowned Acoma Pueblo poet and storyteller Simon J. Ortiz traces the history of Native / Indigenous people of North America from the time of creation to the present.

Many, many years ago, all things came to be.
The stars, rocks, plants, rivers, animals.
Mountains, sun, moon, birds, all things.
And the People were born.

Told in the rhythms of traditional oral narrative, this powerful telling of the history of the Native/Indigenous peoples of North America recounts their story from Creation to the invasion and usurpation of Native lands. As more and more people arrived, The People saw that the new men did not respect the land. The People witnessed the destruction of their Nations and the enslavement of their people. The People fought hard, but eventually agreed to stop fighting and signed treaties.

Many things changed and became more difficult, but The People continued to farm and create crafts. They remembered and told their children, You are Shawnee. You are Lakota. You are Pima. You are Acoma... You are all these Nations of the People. The People held onto their beliefs and customs and found solidarity with other oppressed people. And despite struggles against greed, destruction of their lands, and oppression, The People persisted.

Simon J. Ortiz is a Puebloan writer of the Acoma Pueblo tribe, and one of the key figures in the second wave of what has been called the Native American Renaissance. Ortiz has published many books of poetry, short fiction, and nonfiction, but The People Shall Continue is his only book for young readers. His writing focuses on modern people's alienation from others, from oneself, and from one's environment--urging humanity to reconnect the wisdom of ancestral spirits and with Mother Earth. Ortiz lives in Tempe, Arizona. Sharol Graves is a multimedia artist who creates innovative paintings, serigraphs and computer-generated artworks. She studied art at the Institute of American Indian Arts in Santa Fe, New Mexico during high school and received a Bachelor of Fine Arts degree from Mills College in Oakland, California. Her artwork has been shown throughout the U.S. since 1977. Her Native American Indian lineage includes Chief Tecumseh of the Shawnee Tribe and Chief Peter Graves of the Red Lake Chippewa Tribe. She is a member of the Absentee Shawnee tribe.