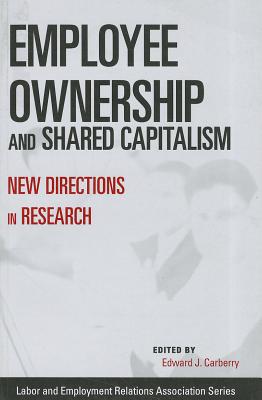 By Edward J. Carberry (Editor)
Email or call for price

One of the most persistent and important, but often ignored, trends contemporary market economies continues to be the ownership of firms by their employees. Since the emergence of different experiments with employee ownership in the early twentieth century, a growing group of companies and expanding set of institutions have opened the door for firms to share the financial returns of economic production with broad groups of employees. The growth of various forms of "shared capitalism" has meant that currently a little under half of all employees in the private sector own stock in the companies in which they work or receive cash-based bonuses linked to different measures of corporate performance.

Employee ownership is a complex phenomenon that can be and has been fruitfully analyzed from a number of different social scientific perspectives. This book showcases the diverse state of cutting-edge academic work on shared capitalism in the United States and Western Europe. Its chapters present a representative cross-section of current research, lively debates, and new research initiatives. Employee Ownership and Shared Capitalism illuminates shared capitalism's complexity as an organizational, psychological, sociological, and economic phenomenon that requires deep interdisciplinary understanding.

Edward J. Carberry is Assistant Professor in the Business-Society Management department at the Rotterdam School of Management, Erasmus University.