How I Became One of the Invisible (Paperback) 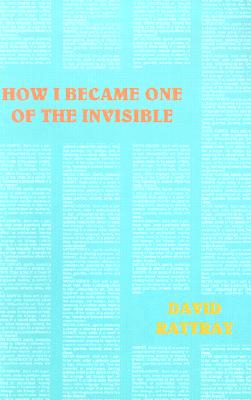 By David Rattray
$13.95
Possibly out of print. Email or call to check availability and price.

Put together by Chris Kraus just before David Rattray's sudden death and published in 1992, " How I Became One of the Invisible" has since circulated as a secret history and guide book to the mystical-poetic-outlaw tradition that runs throughout Western civilization from Pythagoras to the prophetic polyphony of 16th century " In Nomine" music, to the gang of marijuana harvesters and car thieves of East St. Louis, 1961, who become Rattray's friends.

Trained at Harvard and the Sorbonne, Rattray was a poet, translator and scholar, fluent in most Western languages, Sanskrit, Latin, and Greek. Living in Paris during the 1950s, Rattray re-traced the steps of Antonin Artaud and became one of Artaud's first and best American translators. Published by City Lights Books in 1963, Rattray's Artaud translations burned through the aura of transgressive chic that surrounded the poet to reveal the core of his incisive scholarship, technological prophecies, and visionary rage. As Rattray later said of translating Artaud, "You have to identify with the man or the woman. You have to identify with that person and their work. If you don't then you shouldn't be translating it. Why would you translate something that you didn't think had an important message for other people? I wanted to translate Artaud because I wanted to turn my friends on and pass on a message that had relevance to our lives. That's why I was doing it. Not to get a grant, or be hired by an English department..."

What Rattray did for Artaud, he went on to do for Friedrich Holderlin, Rene Crevel, and the " In Nomine" music of John Bull, becoming a concert-level pianist to better understand the logic of baroque. He was, as Betsey Sussler wrote in Bomb after his death in 1993, "the most generous of writers.