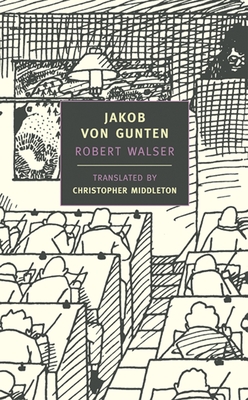 The Swiss writer Robert Walser is one of the quiet geniuses of twentieth-century literature. Largely self-taught and altogether indifferent to worldly success, Walser wrote a range of short stories, essays, as well as four novels, of which Jakob von Gunten is widely recognized as the finest. The book is a young man's inquisitive and irreverent account of life in what turns out to be the most uncanny of schools. It is the work of an outsider artist, a writer of uncompromising originality and disconcerting humor, whose beautiful sentences have the simplicity and strangeness of a painting by Henri Rousseau.

Robert Walser (1878–1956) was born into a German speaking family in Biel, Switzerland. He left school at fourteen and led a wandering, precarious existence while writing his poems, novels, and vast numbers of the “prose pieces” that became his hallmark. In 1933 he was confined to a sanatorium, which marked the end of his writing career. Among Walser’s works available in English are Berlin Stories and Jakob von Gunten (both available as NYRB classics), Thirty Poems, The Walk, The Tanners, Microscripts, The Assistant, The Robber, Masquerade and Other Stories,
and Speaking to the Rose: Writings, 1912–1932.

Christopher Middleton (b. 1926) is a poet, essayist, and translator. He teaches Germanic languages and literature at the University of Texas at Austin and has translated numerous works, including Jakob von Gunten by Robert Walser.

"As a literary character, Jakob von Gunten is without precedent. In the pleasure he takes in picking away at himself he has something of Dostoevsky’s Underground Man and, behind him, of the Jean-Jacques Rousseau of theConfessions. But—as Walser’s first French translator, Marthe Robert, pointed out—there is in Jakob, too, something of the hero of the traditional German folk tale, of the lad who braves the castle of the giant and triumphs against all odds. Franz Kafka, early in his career, admired Walser’s work (Max Brod records with what delight Kafka would read Walser’s humorous sketches aloud). Barnabas and Jeremias, Surveyor K.’s demonically obstructive “assistants” in The Castle, have Jakob as their prototype." -- J.M. Coetzee

The moral core of Walser’s art is the refusal of power; of domination…. Walser’s virtues are those of the most mature, most civilized art. He is a truly wonderful, heartbreaking writer.
— Susan Sontag

If he had a hundred thousand readers, the world would be a better place.
— Hermann Hesse