The Truth About Cruise Ships: A Cruise Ship Officer Survives the Work, Adventure, Alcohol, and Sex of Ship Life (Paperback) 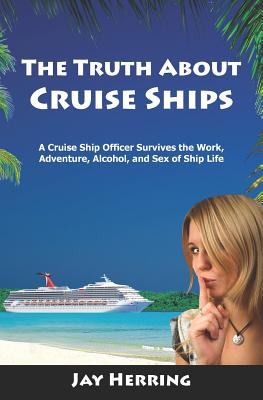 Author's hurricane and flooding video aired on national television by ABC's Nightline to 3.9 million people. A finalist in the Global eBook Awards, this is a behind-the-scenes look at cruise ships in a way that's never been done before. Some of the stories are shocking, some are enlightening, but most are just laugh-out-loud entertaining. This tour behind those "Crew Only" doors will reveal: - How romance on a cruise ship is unlike anywhere else - The insane things passengers do - Why alcohol is mandatory at sea - How nude cruises compare to Christian cruises - A first hand account of damage from getting caught in a hurricane Jay Herring was an American senior officer and one of the few who had physical access to the entire ship. He worked with every department and every senior officer, including the captain. His wife worked in the casino, and combined they worked for Carnival Cruise Lines for 10 years and sailed on over 503 cruises. If you've ever wondered what happens below deck on a cruise ship, then get ready to laugh through an experience unlike any other . . Chapter 1 How Easy Is Romance on a Cruise Ship? I had been onboard my first ship for five days when I went to the crew bar and met a woman from Trinidad and Tobago. She was a black woman and she was overweight, maybe even a little flabby, but such a sweetheart. I saw her the next night in the crew bar and she looked upset so I went over and sat down. "What's wrong?" I asked. "I just had an argument with the chief purser," she said with her Caribbean accent. "That's too bad." "Yes, I do not get along with the pursers on this ship very well," she said, starting to tear up a little. "I do not have many friends onboard." Although I liked her, I could understand why others might shy away. She had slow, almost voodoo-like mannerisms that bordered on creepy. But she was so easy to talk to and, like me, perfectly content to sit and talk one on one. "So do you have a girlfriend?" she asked, changing the subject. "No." "Have you been with anyone on the ship yet?" "Nope. It's actually been twelve years since I slept with someone." "Come on now." "It's true." I said, and then told her why (more on that later). "Hmm. That's fascinating. You know, I used to sleep with a skinny white guy from England on my last ship. You remind me of him." "Oh, yeah?" "He and I had lots of fun, and I never left him unsatisfied. I may not look it, but I'm actually a really good lover." "You don't say." "I've been with lots of men in my day. I'm forty-one, after all. And in my years, I've learned exactly what men like and how to please them. And now"-she took a sip of her drink-"and now all the men I sleep with are extremely satisfied." I had always imagined athletic girls-especially flexible athletic girls-to be the best lovers. But this lady from Trinidad had me rethinking that assumption. Maybe it was just another one of the after effects of abstinence, but those voodoo mannerisms were now bordering on sensual. "Would you like to have sex with me?" she asked, taking another sip of her drink. "We could go to my cabin right now." Woodrow. I couldn't believe how quickly the opportunity had presented itself. "I might be interested in that." "Might?" "Yeah." "But not right now?" "Yeah, not just yet." "Okay, well, you think about it and I'll call you later this week." She got up and left me at the table, alone with my thoughts. My cabin phone rang at 8:00 p.m. two days later. "Hi, it's me," she said. "How are you?" "I'm good. How are you?" I responded. "Good, good. Are you ready to do what we talked about the other night?" she asked, wasting no time on idle chit-chat...