Journal of an Ordinary Grief (Paperback) 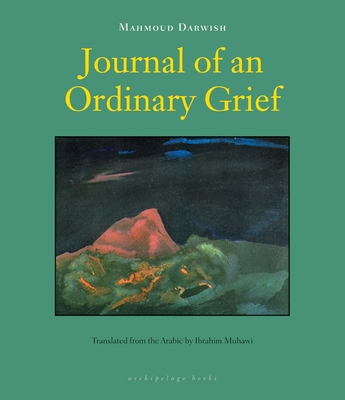 By Mahmoud Darwish, Ibrahim Muhawi (Translated by)
$16.00
On Our Shelves Now

A collection of autobiographical essays by one of the greatest poets to come from Palestine.

"Every beautiful poem is an act of resistance," asserts Darwish. Both voice of the Palestinian people and one of the most transcendent poets of his generation, Mahmoud Darwish also wrote several remarkable volumes of autobiographical essays over the course of his life. First published in Beirut in 1973, these probing essays ask vital questions about the existentially complex realities the Palestinians in Israel face and the ambiguity of Darwish’s own identity as an Israeli Palestinian. They call upon myth, memory, and language to delve into the poet’s experience of house arrest, his encounters with Israeli interrogators, and the periods he spent in prison. Meditative, lyrical, rhythmic, Darwish gives absence a vital presence in these linked essays. Journal is a moving and intimate account of the loss of homeland and, for many, of life inside the porous walls of occupation—no ordinary grief.

Mahmoud Darwish (1941–2008) was born in the village of al-Birwa, in the Galilee, Palestine. He became a refugee at age seven. He worked as a journalist and editor in Haifa and left to study in Moscow in 1970. His exilic journey took him to Cairo, Beirut, Tunis, Paris, Amman, and Ramallah, where he settled in 1995. He is one of the most celebrated and revered poets in the Arab world. He published more than thirty books, and his poetry has been translated into thirty-five languages. Darwish was named a Knight of the Order of Arts and Letters by France in 1993, was awarded the Lannan Cultural Freedom Prize in 2001, the Prince Claus Awardin 2004, and the Cairo Prize for Arabic Poetry in 2007.

Since the appearance of Speak, Bird, Speak Again: Palestinian Arab Folktales in 1989, Ibrahim Muhawi has devoted himself to the study and translation of Palestinian and Arabic folklore and literature. He is co-editor of Literature and Nation in the Middle East and translator of Darwish’s Memory for Forgetfulness and Zakaria Tamer’s Breaking Knees. He is currently working on a book on Mahmoud Darwish.

There is no finer Arab poet for English readers to start with. —Times Literary Supplement

This collection of essays is one of the most effective, useful, and deeply moving witnessings of a historical tragedy I have read. The writing has an unsurpassed freshness, power, and awe exactly because it is poetry that happens to have justified margins. Darwish hungers to understand why such calamities have befallen his people and has a profound need for sharing—and succeeds brilliantly at both of these. This book should beon the reading list of every school in this country. —Pierre Joris

An important anchor in the work of a poet celebrated for providing a national identity to displaced Palestinians. Darwish gives displacement a personal and deeply anguished voice. His artistry provides greater context for a conflict that to this day floods citizens of the world with grief. —The New York Times Book Review

Rewardingly contemplative. Capably translated and helpfully annotated by Ibrahim Muhawi. A passionate ode to his homeland. —The Christian Science Monitor

Mahmoud Darwish is the Palestinain poet laureate. His verses chronicle the Palestinians' anguish at the loss of their land. Ibrahim Muhawi's limpid translation captures the longing, the ache of exile. —The Economist

Such an achievement. Indispensable reading for anyone interested in the roots and ramifications of the Israeli and Palestinian conflict. Muhawi's own prose and meticulous footnotes are impeccable. An inspired and scholarly piece of research. —Words Without Borders