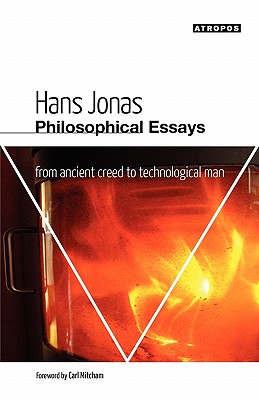 Philosophical Essays is a pivotal volume in the collected works of Hans Jonas (1903-1993), one of most important German-American philosophers of the last half of the 20th century. Of the four books published in English during his lifetime, it is the only one to include contributions from his three primary areas of achievement: philosophical reflection on gnosticism, on biology, and on technology - hence the subtitle, "From Ancient Creed to Technological Man." The three sections of the book are, however, given in reverse order with essays on "Science, Technology, and Ethics" preceding papers on "Organism, Mind, and History" and "Religious Thought of the First Christian Centuries." The temporally ultimate project is that which Jonas sees as having philosophical priority. This collection of 18 essays originally published between 1965 and 1974 - that is, after completion of The Phenomenon of Life (1966) but before The Imperative of Responsibility (1984) - manifests the most intensive integration of Jonas's three projects. As such, this volume provides special witness to the inherent unity of what might otherwise be seen as more episodic work. In the Introduction Jonas himself argues for both a biographical and a philosophical unity, the latter of which is emphasized in a new foreword by Carl Mitcham of the European Graduate School.