Media and Formal Cause (Paperback) 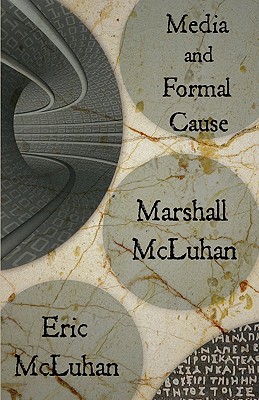 Reviews No one understood causality, whether Aristotelian or electric, like Marshall McLuhan. Now, in Media and Formal Cause, no one reveals understanding of formal cause in the digital environment better than McLuhan's prot g son, Eric. In the foreword, Lance Strate writes that M. McLuhan's Understanding Media was one of the most important books of the 20th century. For anyone who wishes to understand how things truly work, Media and Formal Cause is one of the most important books of the 21st. Arguably formal cause has been the least understood but the most intellectually important of all of Aristotle's four agents or processes of causation. This small volume proffers a large understanding of this formative, previously mysterious level of invisible creation. Three essays by Marshall (one with co-author Barry Nevitt) and a powerful new essay by Eric give new meaning to ye olde clich , "like father, like son". While reading writing that is engaging, encyclopedic, and electric, we discover that formal cause is not what you think... but it is vital to how you think.
-Thomas Cooper, Professor of Visual and Media Arts, Emerson College; author of Fast Media/Media Fast In Media and Formal Cause Eric McLuhan updates an important part of his father's work that is often overlooked, the quixotic role of causality in making sense of how new media change the way we construct our environment and our communication. How does novelty cause antiquity? When do effects precede causes? Read on, and you shall find out.
-David Rothenberg, Professor of Philosophy and Music, New Jersey Institute of Technology; author of Why Birds Sing and Thousand Mile Song Like his mentor, Gilbert Keith Chesterton, Marshall McLuhan was often accused of indulging in mere paradox. But Media and Formal Cause demonstrates the profound understanding that underlies the work of both Chesterton and McLuhan, the understanding that we live in a paradoxical world. Both McLuhan and Chesterton attempted to jar readers loose from what Cardinal Newman called "paper logic" into a recognition of the total situation in which we find ourselves. This very readable and accessible volume should greatly assist new readers of McLuhan and remind long time students of just how challenging and exhilarating his explorations were.
-Philip Marchand, author, Marshall McLuhan: The Medium and the Messenger A sage and perceptive quartet of essays which capture and extend a still quintessentially unique way of thinking about media, via patterns and connections that harken to the ancient world and redound to our present and future.
-Paul Levinson, Professor of Communication and Media Studies, Fordham University; author of Digital McLuhan, and of New New Media