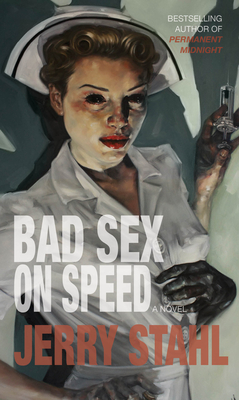 Bad Sex On Speed is a savage, careening, hyper-real nightmare of a novel, taking us to the depths of Amphetamine America. Told with no concession to traditional narrative, in the voices of those in the grips and on the fringes, the stories that emerge are at once devastating, hysterical, and--perhaps most terrifying of all--going on all around you, all the time. Stahl digs deep into the psyche of the most demented and dispossessed among us, returning with a vision so unsparing that those not prepared to experience the screaming depths of speed psychosis up close and on the page should back slowly away and return to their lives unscathed.

Pushcart Prize-winning author Jerry Stahl has written six books, including the memoir Permanent Midnight (made into a film with Ben Stiller and Owen Wilson), and the novels Pain Killers and I, Fatty (optioned by Johnny Depp). Former Culture Columnist for Details, Stahl's widely anthologized fiction and journalism have appeared in a variety of places, including Esquire, The New York Times, Playboy, The Rumpus, and The Believer. He has also written extensively for film and television, including the highest rated episodes of CSI and, most recently, the HBO film Hemingway & Gelhorn, with Nicole Kidman and Clive Owen.