Passport to Magonia: From Folklore to Flying Saucers (Paperback) 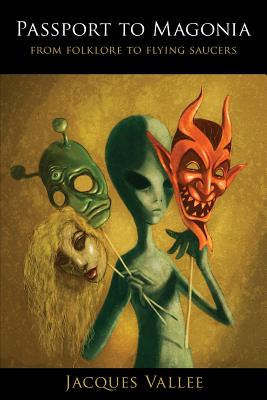 By Jacques Vallee
Email or call for price

It is readily acknowledged that our time has surpassed all epochs in history for the accumulation of technical knowledge, physical power over our environment, and economic might. It is less often pointed out, however, that our age has generated, and continues to generate, mythical material almost unparalleled in quantity and quality in the rich records of human imagination. More precisely, people have very frequently reported the observation of wonderful aerial objects, variously designated as flying saucers, unidentified flying objects (UFOs), and so on; among these narratives descriptions of landings made by these craft are commonplace; and that quite a few accounts purport to inform us of the physical characteristics, the psychological behaviour, and the motivation of their occupants. But investigators have neglected to recognize one important perspective of the phenomenon: the fact that beliefs identical to those held today have recurred throughout recorded history and under forms best adapted to the believer's country, race, and social regime. If we take a wide sample of this historical material, we find that it is organized around one central theme: visitation by an aerial people from one or more remote, legendary countries. The names and attributes vary, but the main idea clearly does not. Magonia, heaven, hell, Elfland - all such places have in common one characteristic: we are unable to reach them alive, except on very special occasions. Emissaries from these supernatural abodes come to earth, sometimes under human form and sometimes as monsters. They perform wonders. They serve man or fight him. They influence civilizations through mystical revelation. They seduce earth women, and the few heroes who dare seek their friendship find the girls from Elfland endowed with desires that betray a carnal, rather than purely aerial, nature. These matters are the subject of Passport to Magonia, Jacques Vallee's seminal master-work that changed our understanding of the UFO phenomenon. An instant classic when first published in 1969, the book remains a must-have resource for anybody interested in the topics of UFOs and alien contact, as well as those fascinated by fairy folklore and other paranormal encounters.