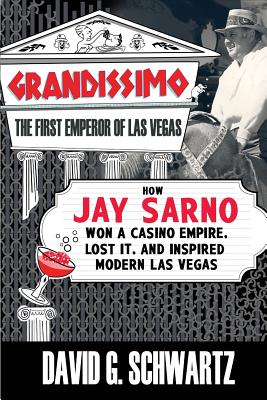 Jay Sarno built two path-breaking Las Vegas casinos, Caesars Palace (1966) and Circus Circus (1968), and planned but did not build a third, the Grandissimo, which would have started the mega-resort era a decade before Steve Wynn built The Mirage. As mobsters and accountants battled for the soul of the last American frontier town, Las Vegas had endless possibilities-if you didn't mind high stakes and stiff odds. Sarno invented the modern Las Vegas casino, but he was part of a dying breed-a back-pocket entrepreneur who'd parlayed a jones for action and a few Teamster loans into a life as a Vegas casino owner.For all of his accomplishments, his empire didn't last. Sarno sold out of Caesars Palace shortly after it opened-partially to get away from the bookies and gangsters who'd taken over the casino-and he was forced to relinquish control of Circus Circus when the federal government indicted him on charges of offering the largest bribe in IRS history-a bribe he freely admitted paying, on the advice of his attorney, Oscar Goodman. Though he ultimately walked out of court a free man, he never got Circus back. And though he guessed the formula that would open up Las Vegas to millions in the 1990s with the design of the Grandissimo, but he wasn't able to secure the financing for the casino, and when he died in 1984, it remained only a frustrating dream.Sarno's casinos--and his ideas about how to build casinos--created the template for Las Vegas today. Before him, Las Vegas meant dealers in string ties and bland, functional architecture. He taught the city how to dress up its hotels in fantasy, putting toga dresses on cocktail waitresses and making sure that even the stationery carried through with the theme. He saw Las Vegas as a place where ordinary people could leave their ordinary lives and have extraordinary adventures. And that remains the template for Las Vegas today.Grandissimo is the story of how Jay Sarno won and lost his casino empire, inventing modern Las Vegas along the way.In Grandissimo, you'll learn Jay's fascinating story, and also plenty of things you never knew about Las Vegas, including: - the true story about how Jimmy Hoffa's Teamsters Union first started funding Sarno projects-how Steve Wynn ended up answering the telephone in Hoffa's suite on the second day Caesars Palace was open- how Sarno, represented by Oscar Goodman, beat a seemingly-airtight case against him when he was accused of offering the largest bribe in IRS history to an undercover agent- how Sarno's unbuilt Grandissimo became the template for the 1990s "mega-resort" era in Las VegasFrom start to finish, it's the story of the man who inspired modern Las Vegas.

David G. Schwartz, the Director of the Center for Gaming Research at the University of Nevada, Las Vegas, is a writer, speaker, and consultant whose areas of specialty include the history of and current issues in gambling. An Atlantic City native with hands-on experience in the gaming industry, Schwartz has been at UNLV since 2001. In addition to being an active consultant in the gaming field, Schwartz is Gaming and Hospitality editor for Vegas Seven magazine, where he writes the biweekly "Green Felt Journal" column as well as regular feature and long-form pieces about the casino and tourism industries in Las Vegas and elsewhere. Schwartz earned his bachelor's degree (a double major in anthropology and history) as well as his master's degree (American History) from the University of Pennsylvania before receiving his doctorate in US History from UCLA. He lives in Las Vegas with his wife and their two children.