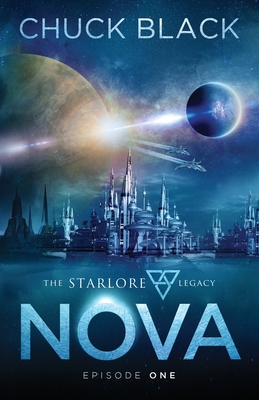 A mighty empire...a lowly slave...a galaxy to save. Will a hero rise?

Nova chronicles the early years of the Aurora Galaxy after the great war between two immortal races known as the Malakians and the Torians. The despot, Zari Treville, is leading the Torians on a campaign to rule the galaxy, but Supreme Chancellor Ell Yon, leader of the Malakians, stands in his way. Both races have technology that mankind can't begin to understand or even imagine.Young Daeson Lockbridge, a Starcraft pilot born of royal blood on the planet Jypton, finds himself at the epicenter of a clash between the Rayleans, a servant class derogatorily referred to as the Drudge, and the ruling class of the Jyptonians. A chance encounter with a lowly Starcraft mechanic changes everything he thought he knew and threatens every part of his reality. He is secretly taken with the fiery young Raylean mechanic named Raviel, but there are strict fraternization rules about interacting with the Drudge. One fateful night, he encounters an oracle that reveals to him his true identity - he's not in fact royalty, but is instead pure-blooded Raylean. Overwhelmed and desperate for truth, he turns to Raviel for guidance. When his cousin Linden, the royal heir to the Chancellor of Jypton, discovers Daeson's feelings for the lowly Drudge, he sets out to destroy him and the blight on their family name. After Daeson kills a sentry who could expose him, he and Raviel are forced to flee in his Starcraft to a remote and deserted planet near the Omega Nebula. But the radiation from the nebula nearly kills them both as their bodies are purged of Dietum Prime, the genetic code altering agent introduced to mankind by Zari Treville. Having barely survived, they return to Jypton to discover that an assassination of the Jyptonian Chancellor has led to a planet-wide rebellion of the Rayleans. Severe persecution with weekly executions commence as Daeson and Raviel struggle to decide what to do. Desperate for answers and help, Daeson decides to seek the oracle that had once foretold it all...