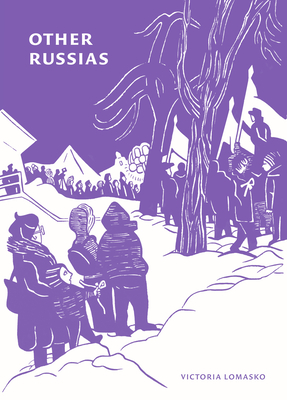 Moving graphic journalism that portrays some seriously underrepresented people with dignity and compassion.

Other Russias is the brilliant first collection of graphic journalism by artist and activist Victoria Lomasko. A fixture at Moscow’s protests and political trials, Lomasko illuminates the inequality and injustice at the heart of contemporary Russian society and gives voice to Russia’s many voiceless citizens. Not content to remain in the capital, she travels the country, visiting schools in dying villages; interviewing sex workers in foundering industrial towns; teaching children at juvenile prisons to draw, all while drawing their stories. Her portraits allow readers to see these people as more than words on paper and to see them as she does: with dignity, compassion, and love. Other Russias is an urgent and poignant work by a major talent.

Victoria Lomasko was born in Serpukhov, Russia in 1978. She works as a graphic artist and has lectured and written widely on graphic reportage. Lomasko is the coauthor of the book Forbidden Art, which was nominated for the Kandinsky Prize in 2010. She has also co-curated two major art exhibitions--The Feminist Pencil and Drawing the Court. Her work has been exhibited in numerous shows in Russia and abroad. She lives in Moscow.

“Victoria Lomasko’s gritty, street-level view of the great Russian people masterfully intertwines quiet desperation with open defiance. Her drawings have an on-the-spot immediacy that I envy. She is one of the brave ones.”
—Joe Sacco

“Powerful . . . Though Victoria Lomasko’s figures are rendered in broad, black-and-white strokes, her depictions of God-fearing old ladies, young skinheads, and striking truckers never fall into the traps of parody, contempt, or stereotype. Her focus on the daily lives of regular people offers a respite from the international fixation on Vladimir Putin—who is, after all, only one of a hundred and forty-four million Russians.”
—Sophie Pinkham, NewYorker.com

“An album of images and impressions of ordinary, unconnected Russian citizens who have unexpectedly found themselves activists . . . Victoria Lomasko is the graphic artist equivalent of the great Svetlana Alexievich, the Nobel Prize winner whose work also records and vivifies the lives of the Invisible and the Angry.”
—Bob Blaisdell, Russian Life