Death in the High Lonesome (Paperback) 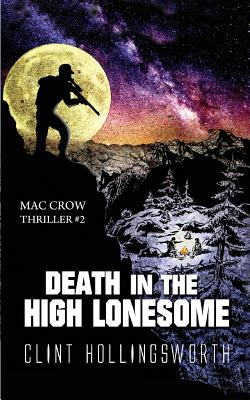 WILDERNESS THRILLER. It's common for the first day on the job to go badly, but not this badly. Tracker Mac Crow quickly goes from hunter to hunted.Mackenzie Crow is hired to trail a fugitive from the law. Mac might be new to bounty hunting, but he is right at home in the northern woods, and this is just the sort of job he needs to make a name for himself.Skillfully pursuing a murderer deep into the wilderness, Mac assumes this manhunt will be a slam dunk, after all, law officers and fellow bounty hunter Rosa are at his side. Homo sapiens are full of surprises however, and the young tracker finds himself on the wrong end of the hunt.Mac and Rosa must escape from the deep mountains, with minimal gear during a blizzard, and to make things worse, they are being tracked by a killer who always seems to be three steps ahead of them. If Mac's skills of survival and tracking fail them, he and Rosa's bodies won't be found until spring time.#2 in the Mac Crow thriller series. "The Sage Wind Blows Cold" (Mac Crow #1) was a Chanticleer Dante Rossetti awards finalist, New Adult.

Clint Hollingsworth has studied tracking under Tom Brown, Jr., consultant on "The Hunted," and is a black belt in Goju Ryu karate. Having spent a good deal of his time in the woods growing up, Hollingsworth developed a certain sensitivity to the natural environment. In 1990, he became a student of Brown's Tracker School, learning wilderness survival and tracking. This led the author to more advanced training from naturalist Jon Young in tracking and awareness, and survival skills from survival instructor Frank Sherwood. These skills have saved his life in the far back country. Hollingsworth holds a 4th degree black belt in Sho Rei Shobu Kan Okinawan Goju Ryu. He co-authored Wolves in Street Clothing, a non-fiction book on situational awareness, with judo and martial arts expert Kris Wilder, and is the author/artist/creator of the long running post-apocalyptic webcomic (and its attending books) The Wandering Ones at wanderingones.com with over 20,000 readers across the world. He lives in the beautiful Cascade Mountains in Washington state with his lovely wife Suzette, author of Sherlock Holmes and the Case of the Sword Princess. You can find more about Clint at his website; clinthollingsworth.com