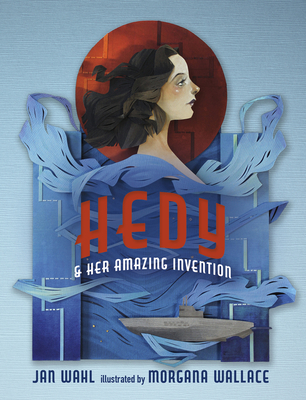 In one of the first books written for children about the amazing life and work of actress and inventor Hedy Lamarr, and one of the final books written by Coretta Scott King Honor and Christopher Medal-winner Jan Wahl, readers will be entranced by all that Hedy accomplished on and off the big screen. In chapter-picture book style, Hedy and her Amazing Invention teaches kids about the pioneering scientific work and inspiring courage of Hedy Lamarr, the famous Hollywood actress who fought against old-fashioned parents, a domineering husband, prejudice, and stereotypes to become an accomplished inventor whose work helped pave the way for many of the communications technologies we enjoy today, from Wi-Fi to GPS to signal-blocking devices. Through collage-work illustrations and accessible text, Wahl and Wallace provide context to the concept of Lamarr’s most famous invention with fun and ease. This story is for anyone looking for an uplifting biography about a fearless 20th century woman who knew her worth and was determined to utilize all of her talents to make the world a better place. The first book in Penny Candy’s Amazing Women series.

Jan Wahl was the author of over one hundred children's books, including Coretta Scott King Honor-winner Little Eight John and the Christopher Medal-winner Humphrey's Bear. Bowling Green State University awarded him the honorary degree of Doctor of Letters in recognition of his work in children's literature and in the history of film. Jan was an active speaker at schools, conferences, and writing workshops across the country. He lived in Toledo, Ohio.Morgana Wallace was born into an artistic family in Winnipeg, Manitoba, and later moved to Victoria, British Columbia, where she studied at the Victoria College of Art, before becoming a full-time artist. As a child, she was captivated by book illustrations, and still believes they are as important as the narrative. Her medium is mainly paper collage, but she incorporates watercolor, ink, and pen to create her imaginary world of characters. She has had several successful shows at Victoria's Madrona Gallery, as well as completing four commissions for the British children's magazine, Aquila. She lives in Victoria, British Columbia.

★"Jan Wahl distills the eventful life of Hollywood actress and inventor Hedy Lamarr in this grade school biography. It is illuminating and illustrated and is sure to be inspiring for young scientists with its message that 'Hedy wanted to be more than just a pretty girl'...A luminous tribute to a remarkable woman who carved out an independent and creative life of her own design." —Foreword Reviews, starred review

★"The main narrative offers an engaging introduction to Lamarr, and, in an appended note, Wahl shares his recollections of meeting her on three occasions. A Canadian artist, Wallace contributes richly colored illustrations created with layers of cut paper, pen and ink, and watercolors. Notable for portraying their subject with consistency, clarity, and beauty, these distinctive collages enhance the book’s appeal to a broad audience."—Booklist, starred review

"This is a clear and interesting portrait, and Hedy is portrayed as a strong, intelligent woman full of talent and innovation and is sure to provide young readers with inspiration and encouragement to investigate new ideas of their own."—Kirkus Reviews

"Wahl's short biography presents a fairly well-rounded look at Hedy Lamarr. Her seemingly incongruous twin image as glamorous actress and passionate inventor will be intriguing and encouraging to many young readers. Wallace's primarily paper collage artwork is beautiful and adds to the glamour of her biographical subject. The picture book's smaller than normal trim size will appeal to the reader who may think they've outgrown picture books. Libraries can easily add this title to their collections knowing it can be used for many different types of readers."—School Library Connection