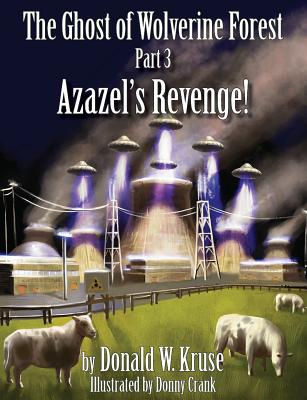 Teenagers Brad and Sarah are sitting in a rowboat, fishing on Wolverine Lake. Suddenly an underwater UFO bursts through the surface directly beneath them, dumping them into the water. As they thrash about, trying not to drown, a ray of intense light beams them up into the spaceship, then zooms off across the sky. The ship lands inside a humongous cavern in a strange Mars-like place called Duadel. But they're not on Mars, they're still on planet Earth. After the ship lands, they discover they're not alone. On board the ship with them is a monstrous fallen angel named Azazel who is not their host, but rather their captor. As Azazel leads them down a stone staircase to a lower chamber inside the cavern, Brad and Sarah come face to face with a group of ferocious, man-eating giants Terrified, the two run and try to hide, but they aren't able to go far. The only hiding place they can find is inside a cabinet on board the landed ship. As they squeeze inside the cramped hiding place, their hearts pounding, they hold their breath as Azazel and the giants search outside. Brad and Sarah's hiding place is a good one because they remain undiscovered, and Azazel is furious as he launches the ship once again, thinking the two are still somewhere inside that cave, hiding. They have no idea where the UFO is headed now, and they pray they won't be discovered until they can make good their escape. But what happens next will have YOU sitting on the edge of your seat, clutching your book, white-knuckled, as you turn page after page, swept up in the mystery and suspense. Will Brad and Sarah ever make it out of there alive? Will they ever get home again? Read the book and find out. And as you read, be sure to keep your windows and doors locked ... just in case The Ghost of Wolverine Forest, Part 3: Azazel's Revenge features fantastic black and white illustrations by Donny Crank, and a phenomenal foreword by author, speaker, pastor, Douglas Hamp.