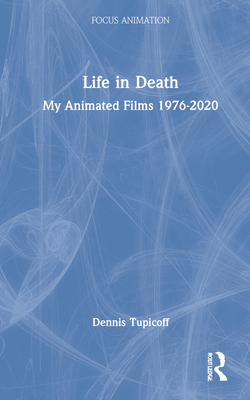 By Dennis Tupicoff
Email or call for price

Death--the very word is resonant with emotion, imagery, and meaning. It is the ultimate life-event that all living things will eventually experience; as such, it comes as no surprise that death is often a popular theme of literature, art, games, cinema, music, and even animation. Dennis Tupicoff, world-renowned animator, writer, and producer, is an expert on the narrative application of death in animation. Take a journey with Tupicoff as he goes in-depth into the many themes, associations, and practices found in film and especially animation. Life in Death: My Animated Films 1976-2020 explores death as it relates to experience, storytelling, theory, and narrative. The examples in the very readable text are organized into three broad categories: cartoon, documentary, and hybrids of various types.

As writer/director/animator/producer, Dennis Tupicoff (1951) has made many films, both animated and live action, and has won many awards, including the Grand Prix at Ottawa, Oberhausen, Huesca, Istanbul, Madrid, and New Orleans. His career retrospectives have been screened in Krakow, Berkeley, Poznan, Kecskemet, Seoul, Gothenberg, Melbourne, and Brisbane. His animation work is discussed in histories such as Animation: A World History (Bendazzi) and Animation: The Global History (Furniss), and in more specialized studies like Animated Documentary (Honess Roe), Animated Realism (Kriger), and Australian Animation: An International History (D&L Torre). He was also featured in Chris Robinson's book as one of the Unsung Heroes of Animation. In his standard text, Introduction to Documentary, Bill Nichols says of the animated His Mother's Voice: It is an extraordinarily powerful piece of filmmaking.Dennis Tupicoff was Lecturer in Post-graduate Animation at the VCA School of Film and Television (1992-94). He has lectured, mentored, and taken writing workshops at many universities around the world, and has spoken at many international conferences. He has been invited to residencies at Abbaye Fontevraud (France) and is a Fellow at the MacDowell Colony (USA).