Why Should the Devil Have All the Good Music?: Larry Norman and the Perils of Christian Rock (Hardcover) 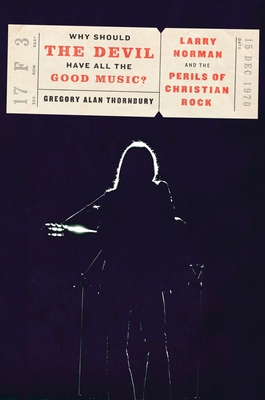 The riveting, untold story of the “Father of Christian Rock” and the conflicts that launched a billion-dollar industry at the dawn of America’s culture wars.

In 1969, in Capitol Records' Hollywood studio, a blonde-haired troubadour named Larry Norman laid track for an album that would launch a new genre of music and one of the strangest, most interesting careers in modern rock. Having spent the bulk of the 1960s playing on bills with acts like the Who, Janis Joplin, and the Doors, Norman decided that he wanted to sing about the most countercultural subject of all: Jesus.

Billboard called Norman “the most important songwriter since Paul Simon,” and his music would go on to inspire members of bands as diverse as U2, The Pixies, Guns ‘N Roses, and more. To a young generation of Christians who wanted a way to be different in the American cultural scene, Larry was a godsend—spinning songs about one’s eternal soul as deftly as he did ones critiquing consumerism, middle-class values, and the Vietnam War. To the religious establishment, however, he was a thorn in the side; and to secular music fans, he was an enigma, constantly offering up Jesus to problems they didn’t think were problems. Paul McCartney himself once told Larry, “You could be famous if you’d just drop the God stuff,” a statement that would foreshadow Norman’s ultimate demise.

In Why Should the Devil Have all the Good Music?, Gregory Alan Thornbury draws on unparalleled access to Norman’s personal papers and archives to narrate the conflicts that defined the singer’s life, as he crisscrossed the developing fault lines between Evangelicals and mainstream American culture—friction that continues to this day.  What emerges is a twisting, engrossing story about ambition, art, friendship, betrayal, and the turns one’s life can take when you believe God is on your side.

Gregory Alan Thornbury has been a college professor, dean, and president of The King’s College in New York City. A popular writer and speaker on philosophy, religion, and contemporary culture, he currently serves at the New York Academy of Art.

"Norman’s role — and struggles — in the cultural landscape of the time is worth remembering. 'God gave me a gift,' Norman once said, in a line that any rocker might adopt, 'not to be popular, but to be invasive.'"
—New York Times Book Review

"Norman, who died in relative obscurity, in 2008, has often been viewed as a tragic figure: a gifted and quirky musician who inspired a generation while alienating his peers and, at times, his fans. In Why Should the Devil Have All the Good Music?, the first biography of Norman, Gregory Alan Thornbury tells a more triumphant story, portraying Norman as a genius and a prophet, clear-eyed in his criticism of what he sometimes called 'the apostate church.'"
—The New Yorker

"[Allows] Norman and his ideals to stand forward in all of their beauty and strangeness. It’s a fascinating portrait of a person, but it also provides valuable opportunities for better understanding the relationship of art and belief in the context of the contemporary American entertainment industry."
—Christianity Today, "2019 Book Awards"

"You don't need to know anything about Larry Norman to be fascinated by the story of his high wire act as a Christian artist, ably told by Greg Thornbury. Open this book to be drawn in, pleasantly surprised, and uncomfortably challenged, just like a member of Norman's original audience."
—Peter Thiel, entrepreneur, investor, and author of Zero to One

“Much of the emotion and movement in American popular music derives from Christian, church-based traditions. Despite that, rock musicians who have made explicit their Christian beliefs have often been treated like objects of discomfort. Larry Norman went headlong into that strange situation to create something unprecedented. This book, beautifully written, gives us the first real look into a man who broke down walls so that others might build homes.”
—Warren Zanes, bestselling author of Petty: The Biography

"There's a lot in this Larry Norman book I was curious about; I was both happy and unhappy to have Larry Norman's earthly arc fully explained.  How the hell did he survive all that? Way Harder Than Vaudeville would be a good alternate title.  The world can be a pretty crummy place, but sometimes there are really nice people like Larry in it, somehow. If Norman was only visiting this planet, he did love it regardless.”
—Black Francis, songwriter and lead singer, Pixies

"A level of insight and intimacy that’s all too rare among recently published artist biographies . . . Thornbury captures [Norman’s] personality in all its complexity, and by the end Norman seems like one of the great unsung cultural figures of the era."
—A.V. Club

"In delicious detail, Thornbury shows that even in Christian music, art and commerce have a hard time mixing successfully. He draws Norman beautifully, empathetically, and realistically, and as equal parts savior and narcissist are revealed, Thornbury allows the reader to see just how fine the line is between the two.”
—Allison Moorer, Grammy-nominated singer and songwriter

“A mind-blowing portrait of evangelical Christianity's one, and only, rock n’ roll wild child, a high-wire act of daring, revelation and empathy, as original as Larry Norman himself.”
—Charles Marsh, Professor of Religion and Society, University of Virginia, and author of Strange Glory: A Life of Dietrich Bonhoeffer

"If there truly was a great crossroads where the devil traded souls for music, then Larry Norman must have made his own visit. If it's true that no musical genre can thrive if it does not own its roots, then this book is required reading for artists who have waded into the faith-based genre without tracing its origins back to where it first sprang from the earth."
—Dan Haseltine, songwriter and producer, Jars of Clay and The Hawk in Paris

“In an American Idol world where trading on the name of Christ and unholy alliances with professional God-talkers can win you the White House, Gregory Alan Thornbury places before us a beautifully complicated Larry Norman, that enigmatic, trickster figure at the heart of the Jesus Movement. By doing so, he invites us to consider again the prophetic genius, the untamable poetic justice of Jesus of Nazareth, to whom Norman remained committed in spite of the dizzyingly false witness and geopolitical catastrophe conducted, even now, in his name. Hear Norman again, and have your senses restored.”
—David Dark, author of Life’s Too Short to Pretend You’re Not Religious