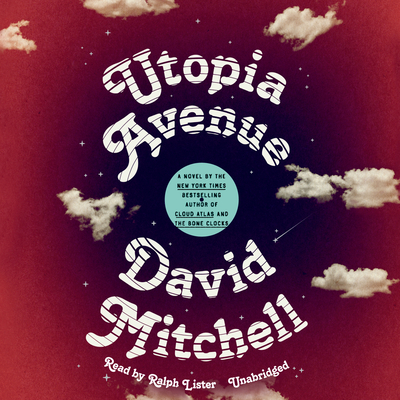 By David Mitchell, Ralph Lister (Read by)
$50.00
Possibly out of print. Email or call to check availability and price.

“Another delightfully addictive novel from this masterful storyteller. We get in on the ground floor witnessing the formation and rise of a rock band in London just as the British Invasion is taking off. Filled with great characters and lots of fun, inside Mitchellisms fans will love — a character named De Zoet, an album with Cloud Atlas in the title — this is a wonderful book and perfect summer reading.”
— Cody Morrison , Square Books, Oxford, MS

NEW YORK TIMES BESTSELLER • The long-awaited new novel from the bestselling, prize-winning author of Cloud Atlas and The Bone Clocks.

“A sheer pleasure to read . . . Mitchell’s prose is suppler and richer than ever . . . Making your way through this novel feels like riding a high-end convertible down Hollywood Boulevard.”—Slate

Utopia Avenue is the strangest British band you’ve never heard of. Emerging from London’s psychedelic scene in 1967, and fronted by folk singer Elf Holloway, blues bassist Dean Moss and guitar virtuoso Jasper de Zoet, Utopia Avenue embarked on a meteoric journey from the seedy clubs of Soho, a TV debut on Top of the Pops, the cusp of chart success, glory in Amsterdam, prison in Rome, and a fateful American sojourn in the Chelsea Hotel, Laurel Canyon, and San Francisco during the autumn of ’68.

David Mitchell’s kaleidoscopic novel tells the unexpurgated story of Utopia Avenue’s turbulent life and times; of fame’s Faustian pact and stardom’s wobbly ladder; of the families we choose and the ones we don’t; of voices in the head, and the truths and lies they whisper; of music, madness, and idealism. Can we really change the world, or does the world change us?

David Mitchell is the author of the novels Ghostwritten, number9dream, Cloud Atlas, Black Swan Green, The Thousand Autumns of Jacob de Zoet, The Bone Clocks, and Slade House. Twice shortlisted for the Booker Prize, in 2018 he won the Sunday Times Award for Literary Excellence.

“[Mitchell]’s work has been compared to that of Haruki Murakami, Thomas Pynchon and Anthony Burgess. But he occupies a field of his own. His eight novels are experimental but approachable. His sentences can be lyrical, but his prose is propulsive. Beneath the layers of references and unconventional structures lie lucid narratives. Mitchell’s obsessions–beyond the fictional meta-universe he has created–are with human voyages of self-actualization; the process of figuring out who we are, and how we connect, in the brief time we have.”—Time

“In 2020, there is something utopian about the idea of people gathering together to make and record and play music, to create a scenius together. We’ll get back to the garden someday.”—Los Angeles Times

“Mitchell, whose novels range through different modes and genres with extraordinary facility, has a lucid, kinetic style at all times, but he is never more impressive than when writing in close third person about characters in altered mental states—captivity, physical pain, madness. . . . A conventional story of a band’s rise turns into a book on another plane entirely.”—The New Yorker

“For his first novel in five years, the author explores the universal language of music. . . . It’s Daisy Jones & the Six on acid.”—Entertainment Weekly

“For his first novel in five years, the author explores the universal language of music . . . it’s Daisy Jones & the Six on acid.”—Entertainment Weekly

“The British pop-folk-rock band Utopia Avenue this novel focuses on seems so true to life, at least one reviewer (who shall not be named) may have Googled them just to confirm that they were a figment of the author’s imagination.”—AARP

“Utopia Avenue’s got all the sex, drugs, and broken dreams you want in a rock novel, plus guest appearances by Jagger, Jerry, Janis, and Jim (Morrison).”—The Philadelphia Inquirer

“Mitchell continues to use the rhythms of surface reality to dig much deeper, but without ever losing the beat.”—Booklist (starred review)

“Mitchell unspools at least a dozen original song lyrics and descriptions of performances that are just as fiery and infectious as his narratives. This is Mitchell at his best.”—Publishers Weekly (starred review)

“Those whose musical tastes end in the early 1970s—and literary tastes are up to the minute—will especially enjoy Mitchell’s yarn.”—Kirkus Reviews (starred review)