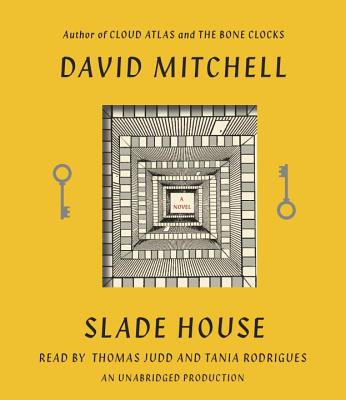 By David Mitchell, Thomas Judd (Read by), Tania Rodrigues (Read by)
$32.00
Possibly out of print. Email or call to check availability and price.

“Every nine years, on the last Saturday in October, an iron gate appears in Slade Alley. It is small and easy to miss, but every nine years someone is looking for it and for the promises and mysteries it offers. Like all ghost stories, the end to this tale is inevitable, but anticipation is an opiate. Who will be trapped next? What form will the deception take? With Slade House, Mitchell adds another layer to a tightly wound fictional universe cast with the characters of his previous works. With each new novel, past, present, and future seep into one another, but the center holds.”
— Adie Smith, Lemuria Bookstore, Jackson, MS

The New York Times bestseller by the author of The Bone Clocks and Cloud Atlas - Named One of the Best Books of the Year by San Francisco Chronicle, NPR, Los Angeles Times, The Guardian, The Telegraph, National Post, BookPage, and Kirkus Reviews Keep your eyes peeled for a small black iron door. Down the road from a working-class British pub, along the brick wall of a narrow alley, if the conditions are exactly right, you'll find the entrance to Slade House. A stranger will greet you by name and invite you inside. At first, you won't want to leave. Later, you'll find that you can't. Every nine years, the house's residents--an odd brother and sister--extend a unique invitation to someone who's different or lonely: a precocious teenager, a recently divorced policeman, a shy college student. But what really goes on inside Slade House? For those who find out, it's already too late. . . . Spanning five decades, from the last days of the 1970s to the present, leaping genres, and barreling toward an astonishing conclusion, this intricately woven novel will pull you into a reality-warping new vision of the haunted house story--as only David Mitchell could imagine it. Praise for Slade House "A fiendish delight . . . Mitchell is something of a magician."--The Washington Post "Entertainingly eerie . . . We turn to Mitchell] for brain-tickling puzzle palaces, for character studies and for language."--Chicago Tribune "A ripping yarn . . . Like Shirley Jackson's Hill House or the Overlook Hotel from Stephen King's The Shining, Slade House] is a thin sliver of hell designed to entrap the unwary. . . . As the Mitchellverse grows ever more expansive and connected, this short but powerful novel hints at still more marvels to come."--San Francisco Chronicle "Like Stephen King in a fever . . . manically ingenious."--The Guardian (U.K.) "A haunted house story that savors of Dickens, Stephen King, J. K. Rowling and H. P. Lovecraft, but possesses more psychic voltage than any of them."--Pittsburgh Post-Gazette "Tightly crafted and suspenseful yet warmly human . . . the ultimate spooky nursery tale for adults."--The Huffington Post "Diabolically entertaining . . . dark, thrilling, and fun . . . a thoroughly entertaining ride full of mind games, unexpected twists, and even a few laughs."--The Daily Beast "Plants died, milk curdled, and my children went slightly feral as I succumbed to the creepy magic of David Mitchell's Slade House. It's a wildly inventive, chilling, and--for all its otherworldliness--wonderfully human haunted house story. I plan to return to its clutches quite often."--Gillian Flynn, #1 New York Times bestselling author of Gone Girl and The Grownup "I gulped down this novel in a single evening. Painstakingly imagined and crackling with narrative velocity, it's a Dracula for the new millennium, a reminder of how much fun fiction can be."--Anthony Doerr, author of All the Light We Cannot See, winner of the Pulitzer Prize

"David Mitchell doesn't break rules so much as he proves them to be inhibitors to lively intelligent fiction."--#1 New York Times bestselling author Dean Koontz From the Hardcover edition.

DAVID MITCHELL is the award-winning and bestselling author of The Bone Clocks, The Thousand Autumns of Jacob de Zoet, Black Swan Green, Cloud Atlas, Number9Dream and Ghostwritten. Twice shortlisted for the Man Booker Prize, Mitchell was named one of the 100 most influential people in the world by TIME magazine in 2007 ("The most consistently interesting novelist of his generation," TIME). With KA Yoshida, Mitchell co-translated from the Japanese the international bestselling memoir, The Reason I Jump. He lives in Ireland with his wife and two children.