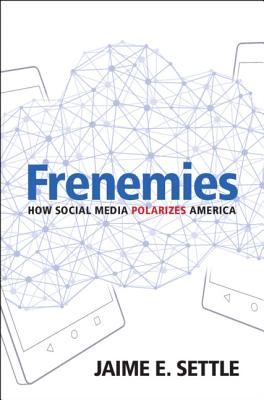 Why do Americans have such animosity for people who identify with the opposing political party? Jaime E. Settle argues that in the context of increasing partisan polarization among American political elites, the way we communicate on Facebook uniquely facilitates psychological polarization among the American public. Frenemies introduces the END Framework of social media interaction. END refers to a subset of content that circulates in a social media ecosystem: a personalized, quantified blend of politically informative 'expression', 'news', and 'discussion' seamlessly interwoven into a wider variety of socially informative content. Scrolling through the News Feed triggers a cascade of processes that result in negative attitudes about those who disagree with us politically. The inherent features of Facebook, paired with the norms of how people use the site, heighten awareness of political identity, bias the inferences people make about others' political views, and foster stereotyped evaluations of the political out-group.