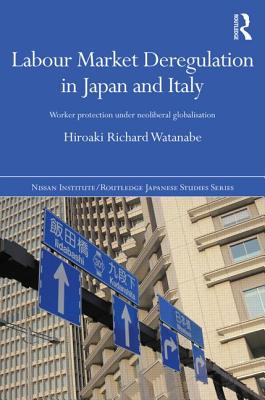 By Hiroaki Richard Watanabe
Email or call for price

Japan and Italy encountered severe economic problems in the early 1990s, and the governments had to deal with those issues effectively under the increasing neoliberal pressures of globalisation. In this context, labour market deregulation was considered an effective tool to cope with those economic problems. However, the forms and degrees of labour market deregulation in the two countries were quite different.

This book seeks to explain the differences in labour market deregulation policies between Japan and Italy, despite the fact that the two countries shared a number of similar political, social and labour market (if not cultural) characteristics. Uniquely, it takes a political, rather than economic or sociological perspective to provide a theoretical and empirical analysis of the processes of labour market deregulation in the two countries. The precarious working conditions of an increasing number of non-regular workers has become a prominent social issue in many industrialised countries including Japan and Italy, but the level of the protection for these workers depends on a country's labour market policies, which are affected by the power resources of labour unions and labour policy-making structures. This book provides a useful perspective for understanding the root causes of this phenomenon, such as the diffusion of 'neoliberal' ideas aimed at promoting labour-market flexibility under globalisation, and demonstrates that there is still room for politics to decide the extent of deregulation and maintain worker protection from management offensives even in an era of globalisation.

Hiroaki Richard Watanabe is Lecturer in the School of East Asian Studies at the University of Sheffield, UK.