Day/Night: Travels in the Scriptorium and Man in the Dark (Paperback) 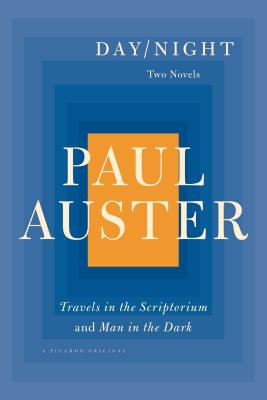 FOR THE FIRST TIME IN ONE VOLUME, TWO EXISTENTIAL CLASSICS BY BESTSELLING NOVELIST PAUL AUSTER

Day/Night brings together two metaphysical novels that mirror each other and are meant to be read in tandem: two men, each confined to a room, one suddenly alert to his existence, the other desperate to escape into sleep.

In Travels in the Scriptorium (2007), elderly Mr. Blank wakes in an unfamiliar cell, with no memory of who he is or how he got there. He must use the few objects he finds and the information imparted by the day's string of visitors to cobble together an idea of his identity. In Man in the Dark (2008), another old man, August Brill, suffering from insomnia, struggles to push away thoughts of painful personal losses by imagining what might have been.

Who are we? What is real and not real? How does the political intersect with the personal? After great loss, why are some of us unable to go on? "One of America's greats"* and "a descendant of Kafka and Borges,"** Auster explores in these two small masterpieces some of our most pressing philosophical concerns.

Paul Auster is the bestselling author of 4 3 2 1, Sunset Park, Invisible, The Book of Illusions, and The New York Trilogy, among many other works. In 2006 he was awarded the Prince of Asturias Prize for Literature. Among his other honors are the Prix Médicis Étranger for Leviathan, the Independent Spirit Award for the screenplay of Smoke, and the Premio Napoli for Sunset Park. In 2012, he was the first recipient of the NYC Literary Honors in the category of fiction. He has also been a finalist for the International IMPAC Dublin Literary Award (The Book of Illusions), the PEN/Faulkner Award (The Music of Chance), the Edgar Award (City of Glass), and the Man Booker Prize (4 3 2 1). He is a member of the American Academy of Arts and Letters and a Commandeur de l’Ordre des Arts et des Lettres. His work has been translated into more than forty languages. He lives in Brooklyn, New York.

“Auster has an enormous talent for creating worlds that are both fantastic and believable....His novels are uniformly difficult to put down, a testament to his storytelling gifts.” —Timothy Peters, San Francisco Chronicle, on Travels in the Scriptorium

“Archly playful and shrewdly philosophical...Celebrates the power of the imagination...the labyrinthine nature of the mind...A tribute to the transcendence of stories.” —Donna Seaman, Booklist, on Travels in the Scriptorium

“Tenderness yoked to violence, literary experiment without irony--Paul Auster has outdone himself.” —John Brenkman, The Village Voice, on Man in the Dark

“A novel that kept my attention from the first page all the way to the last. Frankly, it hypnotized me.” —NPR's All Things Considered on Man in the Dark