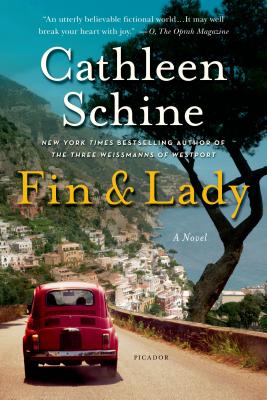 “Fin is a charmer. The bright eleven year old boy's life changes when his mother dies consigning him to the care of his older half-sister Lady. Fin leaves behind the bucolic Connecticut countryside and his mother's dairy farm with the sweet cows. Fin along with his loyal dog Gus head to New York City with Lady in her Gharmin Ghia, driving fast, Lady's only speed. Lady is a bright and shining creature, shy of commitment, full of boundless enthusiasms; she is way ahead of her time in 1964 and totally clueless as to how to raise a young boy. Fin's only prior exposure to Lady was six years earlier when Lady left her fiance standing at the alter and escaped to Capri. Their father followed to bring his erstwhile daughter back to the USA, accompanied by Fin and his mother. Fin was instantly smitten with this magical creature who could defy their formidable father. Lady might be older, but it soon becomes clear that Fin is the protector of his spirited sister, a woman beset by unsuitable suitors and prone to impetuous actions. A lot of history takes place over the course of the story; the Civil Rights Movement, the Vietnam War. Set in Greenwich Village New York and on mystical isle of Capri, the places become like characters too. This is a delightful story, a comic romp about the bonds between a brother and a sister.”
— deon stonehouse, Sunriver Books, Sunriver, OR

From the author of The Three Weissmanns of Westport, a wise, clever story of New York in the '60s

It's 1964. Eleven-year-old Fin and his glamorous, worldly, older half sister, Lady, have just been orphaned, and Lady, whom Fin hasn't seen in six years, is now his legal guardian and his only hope. That means Fin is uprooted from a small dairy farm in rural Connecticut, landing in Greenwich Village in the middle of the Swinging Sixties. He soon learns that Lady-giddy, impulsive, and pursued by an ardent and dogged set of suitors-is as much his responsibility as he is hers.

From a writer the New York Times has praised as "sparkling, crisp, clever, deft, hilarious, and deeply affecting," Cathleen Schine's Fin & Lady is a comic love story for the ages: an enchanting novel of a brother and sister who must form their own unconventional family in increasingly unconventional times.

“Schine's writing sparkles, and her finale proves as unexpected and luminous as love itself.” —Caroline Leavitt, People

“An utterly believable fictional world...It may well break your heart with joy.” —O, The Oprah Magazine

“[Like] writers before her, from Shakespeare to Jane Austen and Evelyn Waugh, Schine skillfully plays with the conventions and the reader's expectations....A wise and wistful comic novel.” —The New York Times Book Review

“An exuberant, tender novel...the prose is zippy and sweet.” —The New Yorker

“Cathleen Schine can always be counted on for an enticing, smart read.” —NPR

“Full of invention, wit, and wisdom that can bear comparison to Austen's own.” —The New York Review of Books on The Three Weissmanns of Westport

“A clever, frothy novel...Schine playfully probes the lies, self-deceptions, and honorable hearts of her characters.” —The New Yorker on The Three Weissmanns of Westport