Telling Our Way to the Sea: A Voyage of Discovery in the Sea of Cortez (Paperback) 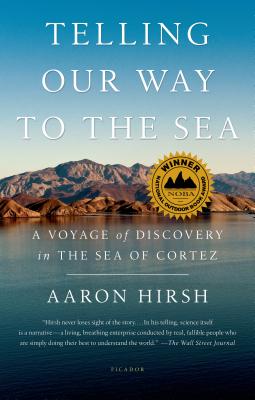 When biologists Aaron Hirsh and Veronica Volny lead twelve college students to a remote fishing village on the Sea of Cortez, they encounter a bay of dazzling beauty and richness. But as the group begins its investigations—conducting ecological and evolutionary studies of the area and its natural inhabitants; listening to the stories of local villagers; and examining the journals of conquistadors and explorers—they realize that the sea is but a ghost of what it once was.

And yet there is redemption in their difficult realization: as they find their places in a profoundly altered environment, they also recognize their roles in the path ahead, and ultimately come to see themselves in a new light. By turns epic and intimate, Telling Our Way to the Sea is a profound meditation on our changing relationships with nature—and with one another.

Aaron Hirsh is chair of the Vermilion Sea Institute. He is a research associate in the Department of Ecology and Evolutionary Biology at the University of Colorado-Boulder, and his essays have appeared in literary journals, The New York Times, and The Best American Science Writing. Hirsh cofounded the biotechnology company InterCell and serves on the board of Roberts and Company Publishers. He lives in Boulder, Colorado.

“Hirsh never loses sight of the story....In his telling, science itself is a narrative--a living, breathing enterprise conducted by real, fallible people who are simply doing their best to understand the world.” —The Wall Street Journal

“Fascinating...As they explore and make discoveries, [Hirsh's students] stand in for us readers, teaching as they learn.” —The Seattle Times

“Hirsh's narrative of daily excursions blends seamlessly with wide-ranging and penetrating forays into biology, evolution, and the history of science....He writes with an illusion of effortlessness....Unforgettable.” —OnEarth

“I can't remember the last time I read a science book with such elegant writing, and Hirsh's travelogue has easygoing philosophical weight as well.” —Smithsonian

“Beautifully descriptive prose and accessible science combine to create a fascinating look at a seemingly abundant ecosystem...This work is a rich exploration of the Sea of Cortez and its surroundings for readers interested in the ecology, history, and current inhabitants of the area, as well as fans of lyrically written natural history books and/or of evolutionary biology.” —Library Journal

“A book as rich and intricate as the oceanic world it evokes, Telling Our Way to the Sea is hard to pigeonhole but easy to savor. Using the dramatic backdrop of the Sea of Cortez--fertile waters rimmed by brutal desert--Hirsh plumbs marine biology, evolutionary change, ecological memory, the history of science, and much more to explore the past and possible future of this fecund ecosystem. One of the most thoughtful books on nature, and our place in it, that I've read in years.” —Scott Weidensaul, author of Living on the Wind and The First Frontier

“Aaron Hirsh thinks like a scientist and writes like a poet. Telling Our Way to the Sea is a captivating, deeply illuminating exploration of the sumptuous natural world we have, and of its origins in the many worlds we've lost. A moving and important and utterly beguiling book.” —William Souder, author of On a Farther Shore: The Life and Legacy of Rachel Carson

“A person who is both a fine scientist and a brilliant writer is a rare phenomenon, but that describes Aaron Hirsh. In the first few pages of Telling Our Way to the Sea, you learn about the fascinating responses of Isostichopus fuscus to predators. After that, you won't be able to put the book down. A literary triumph.” —Paul R. Erlich, Bing Professor of Population Studies, Stanford University