The Fire Line: The Story of the Granite Mountain Hotshots (Paperback) 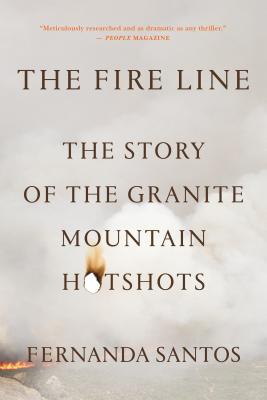 By Fernanda Santos
Email or call for price.
Special Order - Subject to Availability

“In Fernanda Santos’ expert hands, the story of 19 men and a raging wildfire unfolds as a riveting, pulse-pounding account of an American tragedy; and also as a meditation on manhood, brotherhood and family love. The Fire Line is a great and deeply moving book about courageous men and women.”

- Héctor Tobar, author of Deep Down Dark: The Untold Stories of 33 Men Buried in a Chilean Mine and the Miracle that Set Them Free.

When a bolt of lightning ignited a hilltop in the sleepy town of Yarnell, Arizona, in June of 2013, setting off a blaze that would grow into one of the deadliest fires in American history, the twenty men who made up the Granite Mountain Hotshots sprang into action.

An elite crew trained to combat the most challenging wildfires, the Granite Mountain Hotshots were a ragtag family, crisscrossing the American West and wherever else the fires took them. The Hotshots were loyal to one another and dedicated to the tough job they had. There's Eric Marsh, their devoted and demanding superintendent who turned his own personal demons into lessons he used to mold, train and guide his crew; Jesse Steed, their captain, a former Marine, a beast on the fire line and a family man who wasn’t afraid to say “I love you” to the firemen he led; Andrew Ashcraft, a team leader still in his 20s who struggled to balance his love for his beautiful wife and four children and his passion for fighting wildfires. We see this band of brothers at work, at play and at home, until a fire that burned in their own backyards leads to a national tragedy.

Impeccably researched, drawing upon more than a hundred hours of interviews with the firefighters’ families, colleagues, state and federal officials, and fire historians and researchers, New York Times Phoenix Bureau Chief Fernanda Santos has written a riveting, pulse-pounding narrative of an unthinkable disaster, a remarkable group of men and the raging wildfires that threaten our country’s treasured wild lands.

The Fire Line is the winner of the 2017 Spur Award for Best First Nonfiction Book, and Spur Award Finalist for Best Western Contemporary Nonfiction.

Fernanda Santos covers Arizona and New Mexico as the Phoenix bureau chief for The New York Times. The Fire Line is her first book.

"Meticulously researched and as dramatic as any thriller, Santos's account of the 2013 Arizona wildfire that killed 19 firefighters will keep you on the edge of your seat and break your heart."
- People Magazine

"In this riveting and poignant narrative, Fernanda Santos introduces the reader to a brave band of men, most of them in their 20's, who battle destructive wildfires... A gripping account of one of the nation's most deadly wildfires and an inspiring look at the men who put their lives on the line and the loved ones they left behind." - The Associated Press

“In Fernanda Santos’ expert hands, the story of 19 men and a raging wildfire unfolds as a riveting, pulse-pounding account of an American tragedy; and also as a meditation on manhood, brotherhood and family love. The Fire Line is a great and deeply moving book about courageous men and women.”
- Héctor Tobar, author of Deep Down Dark: The Untold Stories of 33 Men Buried in a Chilean Mine and the Miracle that Set Them Free.

"The Fire Line is as powerful and consuming as the elemental force at the heart of this real-life drama.Fernanda Santos has captured fire on paper, turning painstaking reporting into a gripping narrative. The brave men of the Granite Mountain Hotshots have received a tribute they so richly deserve."
- Mitchell Zuckoff, #1 New York Times bestselling author of 13 Hours: The Inside Account of What Really Happened in Benghazi

"In her gripping account of the Yarnell Hill tragedy of 2013, Fernanda Santos skillfully strikes a balance of wildfire science and unfolding human drama. As fast-paced as the disaster it covers, The Fire Line kept me turning pages, and left me with indelible images long after the fire was out. A deeply respectful tribute to the Granite Mountain Hotshots and firefighters everywhere."
- Linda Greenlaw, New York Times bestselling author of The Hungry Ocean

“June 30, 2013. Propane tanks explode, ash darkens the sun, and twenty firefighters from an elite crew gear up to do battle. Fernanda Santos’s account of this extraordinary and deadly day is an ace reporter’s bulletin from hell. Propulsive, gripping, and heartbreaking, The Fire Line tracks the shifting inferno, details the “savage science” of fighting wild fires, and charts the lives and loves of the heroes of the day, the Granite Mountain Hot Shots. In evoking the bonds among these men, Santos uses her gifts to sift triumph from tragedy.”
- Vicki Croke, New York Times bestselling author of Elephant Company: The Inspiring Story of an Unlikely Hero and the Animals Who Helped Him Save Lives in World War II


“The tight knit Hotshots included likely heroes, such as Marines, and unlikely ones, like convicted felons. A riveting account of a hellish day.”
—New York Post

“[Santos] relates this affecting story with respect, momentum and surprising suspense, considering the outcome is known from the beginning… Santos brings immediacy and familiarity to a larger-than-life disaster with quiet admiration and loyalty to truth. By the time the Granite Mountain Hotshots, men now familiar to the reader, go missing, the tragedy of these losses is deeply felt.”
—Shelf Awareness Pro

“In her fine-grained style, Santos portentously documents their activities the night before they marched into action. Switching to the enemy, Santos explains forest-fire behavior, accelerating the drama by tracking that particular blaze… A conscientious and complete researcher, Santos will leave readers awed, somber, and moved.”
—Booklist

“[Santos] makes a valuable contribution to the literature of disaster preparedness and management—and given that wildfire is a growing problem in the ever more arid West, that literature needs all the good work it can get.”
—Kirkus Reviews