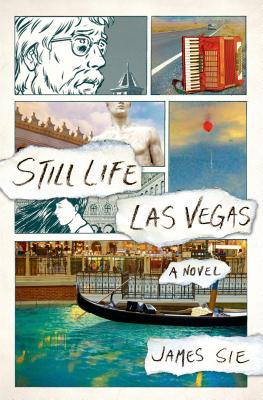 By James Sie, Sungyoon Choi (Illustrator)
$26.99
Possibly out of print. Email or call to check availability and price.

When Walter Stahl was five-years-old, his mother drove away in the family's blue Volvo and never came back. Now seventeen, living in the dregs of Las Vegas, taking care of his ailing father and marking time in a dead-end job along the Strip, Walter's life so far has been defined by her absence. He doesn't remember what she looks like; he's never so much as seen a photograph but, still, he looks for her among the groups of tourists he runs into every day, allowing himself the dim hope that she might still be out there, somewhere.

But when Walter meets Chrysto and Acacia, a brother and sister working as living statues at the Venetian Hotel, his world cracks wide open. With them he discovers a Las Vegas he never knew existed and, as feelings for Chrysto develop, a side of himself he never knew he had. At the same time, clues behind his mother's disappearance finally start to reveal themselves, and Walter is confronted with not only the truth about himself, but also that of his family history.

Threading through this coming-of-age story are beautiful, heart-wrenching graphic illustration, which reveal the journey of Walter's mother Emily: how she left everything to chase a vision of Liberace across the country; and how Walter's father Owen went searching for her amongst the gondolas of the Venetian Hotel.

In James Sie's debut novel, Still Life Las Vegas, the magical collides with the mundane; memory, sexual awakening and familial ties all lead to a place where everything is illuminated, and nothing is real.

JAMES SIE was born in Summit, NJ. and raised on the East Coast by a Chinese father and an Italian mother. He attended Northwestern University and lived in Chicago for many years, working as an actor and playwright, most notably at the Goodman Theatre and Lifeline Theatre. He continued his migration west by moving to Los Angeles with his husband and soon after adopted a son from Vietnam. He currently works as a voiceover artist in animation, most notably featured in "Kung Fu Panda: Legends of Awesomeness"; "King of the Hill" and "Jackie Chan Adventures." He wrote and performed in a solo show about his bi-cultural upbringing, "Talking with My Hands," as part of the East West Players/Mark Taper Forum New Works festival.

Sungyoon Choi is an illustrator and a comic book artist living in Los Angeles, CA. She studied Illustration as Visual Essay at School of Visual Arts MFA program. She illustrated the graphic novel American Widow published by Villard in 2008 and Mission in a Bottle published by Crown Business.

“Sie's debut novel is an often mesmerizing look at grief and coming of age...Engrossing.” —Publishers Weekly

“Sie's first novel is richly imagined and beautifully written with a well-realized setting and memorable characters. Together they make for an altogether auspicious debut.” —Booklist

“Still Life Las Vegas is one of the most startlingly assured debut novels I've ever read. James Sie's writing is gorgeous and the story is heartbreaking. I am in awe.” —Augusten Burroughs, #1 New York Times bestselling author of Running with Scissors and This is How

“Still Life Las Vegas is powerful, comical, and it breaks your heart. I did not want it to end.” —Diana Wagman, author of The Care and Feeding of Exotic Pets

“James Sie took me on the most amazing ride. Intriguing, textured characters fill this debut novel. The charming illustrations compliment this gem of a story that will forever change how we see that (in)famous desert city of Las Vegas.” —Noel Alumit, author of Letters to Montgomery Clift and Talking to the Moon

“Wildly inventive, emotionally raw, and brimming with palpable desire, James Sie's Still Life Las Vegas is as vibrant and unabashedly weird as it is elegiac. A truly visionary debut.” —Gina Frangello, author of A Life in Men, Slut Lullabies

“With humor and a fresh literary voice, Still Life Las Vegas tells a family story that is unique yet straight to the heart. James Sie's poignant and funny debut, with dynamic illustrations by Sungyoon Choi sparkles with originality.” —Elizabeth Crane, author of We Only Know So Much

“Vivid, romantic, complex, and utterly heartbreaking. Still Life Las Vegas exists in the beautiful space between the familiar and the extraordinary, with achingly flawed characters who crackle with life. Not to be missed.” —Becky Albertalli, author of Simon Vs. The Homo Sapiens Agenda

“A heartbreaking character study of a gay teen artist.” —Next Magazine