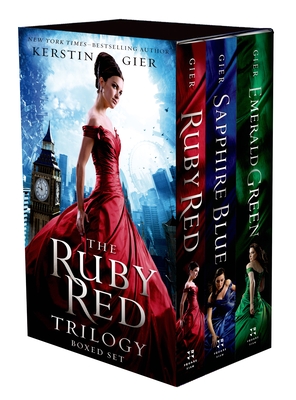 The Ruby Red international bestselling trilogy by Kerstin Gier took the world by storm is now available as a beautiful boxed set. The perfect gift for all the Ruby Red fans.

Sixteen-year-old Gwyneth discovers her family's time-travel gene when she mysteriously lands in the last century. A bestseller in Germany, the first in the beloved YA trilogy.

Gwen's life has been a rollercoaster since she discovered she was the Ruby, the final member of the secret time-traveling Circle of Twelve. Between searching through history for the other time-travelers and asking for a bit of their blood (gross!), she's been trying to figure out what all the mysteries and prophecies surrounding the Circle really mean.

Gwen has a destiny to fulfill, but no one will tell her what it is. And she's just learned that her charming time-traveling partner, Gideon, has probably been using her all along. This stunning conclusion to the trilogy reaches new heights of intrigue and romance as Gwen finally uncovers the secrets of the time-traveling society and learns her fate.

“Gier succeeds on her own terms. . . . Will leave readers anticipating the publication of the next installment, Sapphire Blue.” —The New York Times Book Review, on Ruby Red

Kerstin Gier is the bestselling author of the Ruby Red trilogy, as well as several popular novels for adults. She lives in Germany.

“Gier succeeds on her own terms. . . . Will leave readers anticipating the publication of the next installment, Sapphire Blue.” —The New York Times Book Review, on Ruby Red

“Humorous, romantic and suspenseful, the plot is fast-paced and impossible to put down.” —Justine magazine, on Ruby Red

“This reader only has two complaints: (1) the book ended, and (2) waiting for Emerald Green is already straining her patience!” —VOYA, on Sapphire Blue

“[A] surprising and romantic finale.” —Kirkus Reviews, on Emerald Green

“There's so much to like in this trilogy...[a] thrilling, yet bittersweet conclusion.” —School Library Journal, on Emerald Green