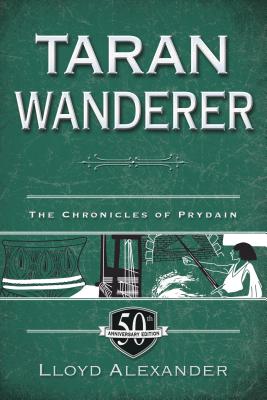 By Lloyd Alexander, Holly Black (Foreword by)
$10.99
Possibly out of print. Email or call to check availability and price.

This is book number 4 in the The Chronicles of Prydain series.

This is the 50th anniversary edition of Lloyd Alexander's classic Taran Wanderer, the fourth book in the Chronicles of Prydain. Whether readers are already familiar with the series or new to it, they won't be able to resist this beautiful special edition filled with bonus material and an introduction by #1 New York Times–bestselling author and Newbery Honor winner Holly Black.

In the fourth book in Lloyd Alexander's The Chronicles of Prydain, Taran must go on yet another journey—to find out who he really is.

Taran is an Assistant Pig-Keeper no longer—he has become a hero. Now he dreams of winning the hand of Princess Eilonwy, but how can someone who has spent his whole life caring for a pig hope to marry royalty? Eager to learn his origins and hoping to discover noble roots, Taran sets off with the faithful Gurgi.

The journey takes the companions to the three witches in the Marshes of Morva and through the many realms of Prydain. At last they reach the mystical Mirror of Llunet, which reveals a person's true identity. Yet Taran may not be ready to face the truth. . . .

About The Chronicles of Prydain:

Since The Book of Three was first published in 1964, young readers have been enthralled by the adventures of Taran the Assistant Pig-keeper and his quest to become a hero. Released over a period of five years, Lloyd Alexander's beautifully written tales not only captured children's imaginations but also garnered the highest critical praise. The Black Cauldron was a Newbery Honor Book, and the final volume in the chronicles, The High King, crowned the series by winning the Newbery Medal for "the most distinguished contribution to American literature for children."

Henry Holt is proud to present this classic series to a new generation of young readers. Jackets have been handsomely redesigned while retaining the original art of Caldecott Medal-winning artist Evaline Ness. Each retypeset volume now includes a pronunciation guide prepared by Lloyd Alexander.

In their more than thirty years in print, the Chronicles of Prydain have become the standard of excellence in fantasy literature for children.

Holly Black is the #1 New York Times bestselling and award-winning author of speculative and fantasy novels, short stories, and comics. She has sold over 26 million books worldwide, and her work has been translated into over 30 languages and adapted for film. She currently lives in New England with her husband and son in a house with a secret library. Book of Night is her adult fiction debut.

“There is no paucity of daring forays, wicked enchanters, tiny people, desperate fights, et cetera; there is in fact all of the color and adventure one expects in the land of fantasy.” —The Bulletin

“Alexander's books remain my sentimental favorites.... And "Taran Wanderer" is the volume that thrilled me the most.” —Greg Pak, NewsARama.com