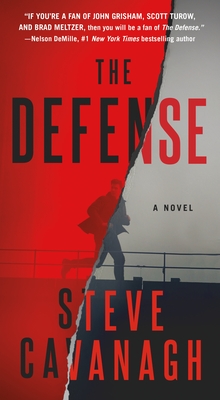 This is book number 1 in the Eddie Flynn series.

"If you're a fan of John Grisham, Scott Turow, and Brad Meltzer, then you will be a fan of Steve Cavanagh's The Defense." —Nelson DeMille, #1 New York Times bestselling author of Radiant Angel

Eddie Flynn used to be a con artist. Then he became a lawyer. Turns out the two jobs aren’t all that different. . .

He vowed never to set foot in a courtroom again after a case gone disastrously wrong. But today Eddie doesn’t have a choice. Because this time, it’s personal.

The head of the Russian mob in New York City, on trial for murder, has kidnapped Eddie’s beloved ten-year-old daughter. Now Eddie has exactly forty-eight hours to draw upon his razor-sharp instincts and use every con, bluff, grift, and trick in the book to defend an impossible trial and save his daughter—or die trying. . .

“Everything a reader could ask for in a thriller—nail-biting suspense, a Russian nesting doll of a plot, and an original and compelling lead.” —Publishers Weekly (starred review)
This edition of the book is the deluxe, tall rack mass market paperback.

Steve Cavanagh is an Irish author from Belfast and at the age eighteen he studied law by mistake. He is now the international award-winning author of the Eddie Flynn novels. His debut novel, The Defense, was nominated for the Ian Fleming Steel Dagger Award for Thriller of the Year, and The Plea won the Prix Polar Award for Best International Novel. Steve is still a practicing lawyer (someday he’ll get the hang of it) and co-host ofthe chart-topping podcast Two Crime Writers And A Microphone. He has been involved in several high-profile civil rights cases, his Eddie Flynn novels have been published in over twenty countries, he’s married with two young children, and in his spare time he is mostly asleep.

“Cavanagh’s stellar debut provides everything a reader could ask for in a thriller—nail-biting suspense, a Russian nesting doll of a plot, and an original and compelling lead.” —Publishers Weekly, starred review

“If you're a fan of John Grisham, Scott Turow, and Brad Meltzer, then you will be a fan of Steve Cavanagh's The Defense. Cavanagh's debut novel introduces a wonderfully flawed hero, Eddie Flynn, one-time con man, now turned lawyer, who will hold you spellbound. This is a hell of a genre-bending book. I hope Cavanagh's working on the sequel.” —Nelson DeMille, #1 New York Times bestselling author of Radiant Angel

“Steve Cavanagh's The Defense puts the 'thrill' back in 'legal thriller.' Non-stop action, unexpected and totally cool plot twists, a sympathetic genius of a con-man/attorney, and a clock that never ever ever stops ticking -- this isn't narrative drive, it's rocket-like narrative propulsion! Hop aboard and enjoy the ride!” —John Lescroart, New York Times bestselling author of The Fall and the Dismas Hardy series

“Reads a lot like a courtroom drama that Lee Child might write about Jack Reacher's younger, hotter-headed brother.” —Irish Times

“The Defense is the best kind of legal thriller, proving that the real drama takes place outside of the courtroom, in the head and the heart. I started reading to see what would happen next, but couldn't put the book down because I needed to learn more about con man turned lawyer Eddie Flynn, the smartest man in the courthouse. I was hooked until the last satisfying page.” —Alafair Burke, New York Times bestselling author of The Ex