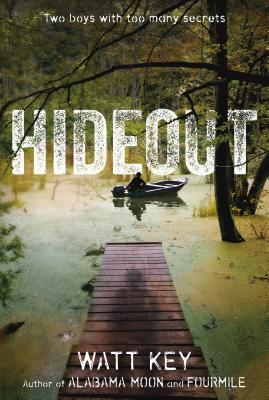 In this riveting middle-grade adventure from Watt Key, the son of a Mississippi policeman finds a boy living on his own in the wilderness.

Twelve-year-old Sam has been given a fishing boat by his father, but he hates fishing. Instead he uses the boat to disappear for hours at a time, exploring the forbidden swampy surroundings of his bayou home. Then he discovers a strange kid named Davey, mysteriously alone, repairing an abandoned cabin deep in the woods. Not fooled by the boy’s evasive explanation as to why he’s on his own, Sam becomes entangled in his own efforts to help Davey.

But this leads him to telling small lies that only get bigger as the danger increases for both boys and hidden truths become harder to conceal.

From the author of Alabama Moon, Hideout is complex tale of friendship, kindness, and dangerous secrets.

This title has Common Core connections.

"A compelling read that will keep a tween audience burning the flashlight batteries late into the night.” —The Bulletin

“In the tradition of Gary Paulsen’s survival tales . . . short chapters filled with action and adventure keep the pacing taut and will entice reluctant readers . . . A good pick for action/adventure fans.” —School Library Journal

“It's man versus nature as well as man versus man in this tale that will have strong appeal to Key's fans and adventure lovers.” —Kirkus Reviews

“An exciting adventure set in Mississippi’s Pascagoula River marshlands . . . The boys’ survivalist adventures in the swamps are suspenseful, [with a] reassuring ending.” —Booklist

Albert Watkins Key, Jr., publishing under the name Watt Key, is an award-winning southern fiction author. He grew up and currently lives in southern Alabama with his wife and family. Watt spent much of his childhood hunting and fishing the forests of Alabama, which inspired his debut novel, Alabama Moon, published to national acclaim in 2006. Alabama Moon won the 2007 E.B. White Read-Aloud Award, was included on Time Magazine's list of the Best One Hundred YA Books of All Time, and has been translated in seven languages.

“Key writes honestly about hunting, trapping and the hardships of survival in this rather unusual coming-of-age story.” —Kirkus Reviews

“Well written with a flowing style, plenty of dialogue, and lots of action.” —School Library Journal

“For boys who dream of unfettered life in the great outdoors . . . Moon's a bona fide hero.” —The Bulletin of the Center for Children's Books