Nickel and Dimed: On (Not) Getting By in America (Picador Modern Classics) (Hardcover) 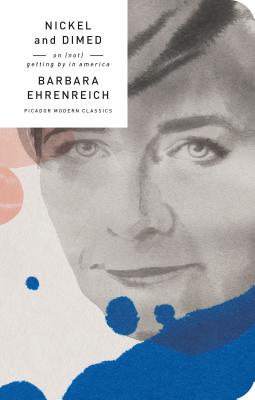 By Barbara Ehrenreich
$16.00
Possibly out of print. Email or call to check availability and price.

Beautifully repackaged as part of the Picador Modern Classics Series, this special edition is small enough to fit in your pocket and bold enough to stand out on your bookshelf.

A publishing phenomenon when first published, Barbara Ehrenreich’s Nickel and Dimed is a revelatory undercover investigation into life and survival in low-wage America, an increasingly urgent topic that continues to resonate.

Millions of Americans work full time, year round, for poverty-level wages. In 1998, Barbara Ehrenreich decided to join them. She was inspired in part by the rhetoric surrounding welfare reform, which promised that a job—any job—can be the ticket to a better life. But how does anyone survive, let alone prosper, on $6 an hour? To find out, Ehrenreich left her home, took the cheapest lodgings she could find, and accepted whatever jobs she was offered. Moving from Florida to Maine to Minnesota, she worked as a waitress, a hotel maid, a cleaning woman, a nursing-home aide, and a Wal-Mart sales clerk. She lived in trailer parks and crumbling residential motels. Very quickly, she discovered that no job is truly “unskilled,” that even the lowliest occupations require exhausting mental and muscular effort. She also learned that one job is not enough; you need at least two if you in to live indoors.

Nickel and Dimed reveals low-rent America in all its tenacity, anxiety, and surprising generosity—a land of Big Boxes, fast food, and a thousand desperate stratagems for survival. Read it for the smoldering clarity of Ehrenreich’s perspective and for a rare view of how “prosperity” looks from the bottom. You will never see anything—from a motel bathroom to a restaurant meal—in quite the same way again.

Barbara Ehrenreich (1941-2022) was a bestselling author and political activist, whose more than a dozen books included Nickel and Dimed, which the New York Times described as "a classic in social justice literature", Bait and Switch, Bright-sided, This Land Is Their Land, Dancing In the Streets, and Blood Rites. An award-winning journalist, she frequently contributed to Harper's, The Nation, The New York Times, and TIME magazine. Ehrenreich was born in Butte, Montana, when it was still a bustling mining town. She studied physics at Reed College, and earned a Ph.D. in cell biology from Rockefeller University. Rather than going into laboratory work, she got involved in activism, and soon devoted herself to writing her innovative journalism.

"These literary gems are the perfect stocking-stuffer size for the serious reader on your list; you’ll look smart wrapping up one or all of them." --USA Today

“Captivating . . . promise that you will read this explosive little book cover to cover and pass it on to all your friends and relatives.” —The New York Times

“Impassioned, fascinating, profoundly significant, and wildly entertaining . . . Nickel and Dimed is not only important but transformative in its insistence that we take a long hard look at the society we live in.” —Francine Prose, O, The Oprah Magazine

“Valuable and illuminating . . . Barbara Ehrenreich is our premier reporter of the underside of capitalism.” —The New York Times Book Review

“Barbara Ehrenreich is smart, provocative, funny, and sane in a world that needs more of all four.” —Diane Sawyer

“Reading Ehrenreich is good for the soul.” —Molly Ivins

“Ehrenreich's scorn withers, her humor stings, and her radical light shines on.” —The Boston Globe

“One of today's most original writers.” —The New York Times